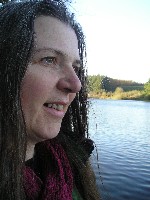 Stupid White Men.. and Other Sorry Excuses for the State of the Nation

Angela's Ashes: A Memoir of a Childhood

Boy in the Water!

Notes from a Big Country

Tales of the Black Widowers

Harry Potter and the Goblet of Fire (Book 4)

The Tenderness of Wolves

Whistling for the Elephants

What Rejected Crayon Are You?

I am a kayaking, hashing, dog-walking, knitting, reading (which goes without saying?) midwife.
My last adventure was attending Interhash in Chiang Mai then whitewater rafting and kayaking on the Mae Taeng River with Siam Adventures (highly recommended).
I live in a soggy but picturesque little village on Dartmoor in Devon with my hubby and two dogs. (Our son has fled the nest).
www.sponsorabollard.com/---/brum2006.gif" alt="Bookcrossing UK Unconvention, Birmingham, 30 June to 2 July 2006 - I was there!!" hspace="5" vspace="5" border="2" align="right">

I have many books gathering dust, just waiting to be liberated, on bookshelves and in higgledy piggledy piles by the bedside. I like to buy a trashy novel to devour whenever I go on holiday or face a lengthy journey by train, plane, boat, coach or someone elses car.


What books do I like?
I have loved Science Fiction/Fantasy since I discovered Isaac Asimov's "I Robot" on a dusty bookshelf in the attic of a big country house my grandmother was housekeeper for and 'borrowed' it (aged about 9yrs). I used to go to the library and read every yellow jacketed Gollancz book I could get my mitts on. I also enjoy horror and any good fiction that someone recommends. I have since discovered the 'Thriller/Detective' genre since I chanced on a book by Val McDermid (was a freebie from Cosmopolitan magazine called Blue Genes).
Books I have read and loved: Gormenghast trilogy, World according to Garp, The Poisonwood Bible, The Curious Incident of a Dog in the Night-time, The Grapes of Wrath. Favourite authors include Christopher Moore (who I was introduced to by bookcrossing!), John Steinbeck, Val McDermid, John Irving, Sara Paretsky, Sheri S Tepper, CJ Cherryh, Octavia Butler, Barbara Kingsolver, Neil Gaiman, Dean Koontz, Raymond Briggs, James Clavell. Umm, that's all I can think of off the top of my head - must be heaps more. Bear in mind that my filing system is corrupt.

Book Ratings
I have struggled with rating books - but with a little help from Scism, via Woosang, I am nicking this wonderful system listed below and hope they don't mind too much. (thanks guys!)

Thanks to Scism for this:

10: Excellent, at the top of its category. This book has impacted me deeply, challenged me profoundly, or has simply been a pure delight to read.
9: Great book - just a nitpick stands between it and a 10.
8: Good, solid book that I would recommend to others.
7: Good book, but it didn't grab me in a big way.
6: Decent, but not my type of book.
5: Only OK.
4: Barely worth reading. The line between taking itand leaving it is very thin.
3: Maybe somebody else would like this. I didn't.
2: Has major problems. I don't recommend it.
1: It's hard to imagine anyone liking this book.

I usually check my email everyday and respond to PMs as soon as received.
If you have not had a reply within a few days please PM me again or contact me via
EMAIL

"A truly good book is something as wildly natural and primitive, mysterious, and marvellous, ambrosial and fertile as a fungus or a lichen."