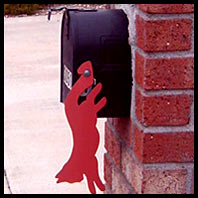 The King of Torts

The Elgin Affair: The Abduction of Antiquity's Greatest Treasures

I have loved reading since I met Dr. Seuss at age 3. I am still in love with Dr. Seuss. Today, many, many years later, I love to read and write. I enjoy non-fiction, inspirational, and self-help. My favorite kinds of fiction are sci-fi, mystery, and suspense, but I will read just about anything.

I think the author I have the most admiration for is Isabel Allende. Her words are magical.


Billy Straight by Jonathon Kellerman
A resourceful runaway alone in the wilds of Los Angeles, 12 year old Billy Straight suddenly witnesses a brutal stabbing in Griffith Park. Fleeing into the night, Billy cannot shake the horrific memory of the savage violence, nor the pursuit of a cold-blooded killer. For wherever Billy turns- from Hollywood Blvd. to the boardwalks of Venice- he is haunted by the chuck-chuck sound of a knife sinking into flesh. As LAPD homicide detective Petra Connor desparately searches for the murderer, as the media swarms mercilessly around the story, the vicious madman stalks closer to his prey. Only Petra can save Billy. But it will take all her cunning to uncover a child lost in a fierce urban labyrinth- - where a killer seems right at home. This is a bookray. PM me to join.

It's Not About Me: Rescue from the Life We Thought Would Make Us Happy by Max Lucado.
If you want to shift into high gear with purpose, this is it: Life makes sense when we accept our place! Our pleasures, our problems, our gifts, and talents... when they're all for the One who created us, we suddenly gain what we've been missing and find what we've been seeking.

The Alienist by Caleb Carr.
New York City, 1896. A serial killer is on the loose, gruesomely preying upon cross-dressing boy prostitutes. Police detectives are making no progress solving the ghastly crimes, but a farsighted "alienist" (psychologist) creates a team of investigators who develop new theories and techniques for trapping a serial killer.Please PM if you are interested in this bookray.

The Prisoner of Azkaban (HP III) by J.K. Rowlings
Right before the start of term, a supremely dangerous criminal breaks out of a supposedly impregnable wizards' prison; it will come as no surprise to Potter fans that the villain, a henchman of Harry's old enemy Lord Voldemort, appears to have targeted Harry. Please PM if you are interested in this bookray.

Two for the Dough by Janet Evanovich
Stephanie Plum is back, and she's packing a whole lot of attitude. Not to mention stun guns, pepper sprays, and an investigation-minded grannie. Laugh out loud funny as well as a mindbending mystery. PM if you are interested in this bookray.

Rays/Rings Already Travelling - updated 6/13/06
Burglars Can't Be Choosers by Edgar award-winning author, Lawrence Block
Bernie tends to work alone. He finds the risks lower and the company better. Some call him a sleuth. Some call him a burglar. But who could resist being hired -- and pocketing a nice, easy fee -- for a simple break-in? Not Bernie. No sooner is Bernie inside the apartment when he discovers the item he's to collect is missing, but a dead body isn't. Soon, Bernie is on the run, fleeing a murder charge, and must find out how set him up and why. This is a bookray. PM me if you are interested. IN AUSTRALIA

The Psycho-Technic League by Poul Anderson
In the beginning was WWII. Out of the flames was born a new civilization, a new humanity dedicated to one world rather than to many nations, to one peace rather than to many wars. Naver again on Planet Earth would one group of humans "defend" themselves against another group equally convinced that all their actions were "defensive." Never again on Planet Earth. But cycles repeat themselves endlessly; Earth is on the beginning of the human story. Next comes planet against planet, and then the stars themselves. PM me if you are interested in this bookray. CURRENTLY IN CANADA

The World of Jeeves by P.D. James
Over 30 short stories featuring Bertie Wooster, his questionable friends and love interest, and the inimitable man's man, Jeeves. CURRENTLY IN MAINE.

Closed Rings
Why Cats Paint - LOST IN TRANSIT TO NM.
The Wind in the Willows - LOST IN New Hampshire.

The Day After Tomorrow by Allan Folsom.
An American surgeon and a grizzled LA homicide cop uncover a secret organization larger than any the world has ever seen, preparing for an apocalypse to begin. PM me if you are interested in joining this ray. CURRENTLY IN UK - POSSIBLY STRANDED

Incubus by Ann Arensberg. Literary horror. This is a perpetual ray. Thanks to katt66 for donating another copy so I could re-start this ray. CURRENTLY STRANDED IN UK

Long After Midnight by Ray Bradbury.
22 fantastical, chilling, hauntingly nostalgic short stories by the one of the world's greatest science fiction writers. PM me if you are interested. CURRENTLY LOST IN TRANSIT TO UK

The Mask of Loki by Roger Zelazny.
The wizard thinks he is in control. The gods think that's funny. Ahriman, the Lord of Darkness, must fall. PM me if you are interested in joining this bookray. LOST IN TRANSIT TO THE UK.

The Spirit of Loving by Emily Hilburn Sell
Now a perpetual ray. PM me if you'd like to sign up! CURRENTLY LOST IN CALIFORNIA

The Venetian's Wife by Nick Bantock.
CURRENTLY LOST IN TRANSIT TO NORWAY OR STALLED IN NORWAY.