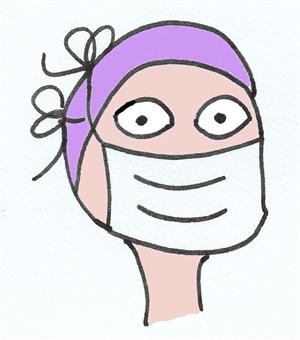 The Wheel of Time: The Dragon reborn

A History of Britain in 21 Women

The Wheel of Time 2: The Great Hunt

The Eye of the World

My picture has been unchanged for a lot of years. I have been wearing masks for so very many hours of my work life and it has nothing to do with Covid19.
********
Since August 2019 I include a self made shopping bag to most of the RABCKs I send.
So far they have gone to
Ruurlo, Riihimäki, Málaga, South Croxton, Entraigues, Riga, Kokkola, Berlin, Helsinki, Milbrook, Heerenveen, Richmond, Uppsala, Edinburgh,
Kansas City, Poughkeepsie,
Hualien,
Whitianga & Christchurch.

I read in German and English and prefer to read the original version but have no preference for German or English if the book was originally written in a third language.
I don't read chicklit or Zombie-stuff, which is somehow the same I think :-)
I really like to find books through Bookcrossing that I would never have taken in a shop.

Favourite sentences in books I've read:
I have noticed that doctors who fail in the practice of medicine have a tendency to seek one another's company and aid in consultation. A doctor who cannot take out your appendix properly will recommend to you a doctor who will be unable to remove your tonsils with success. from "A Farewell to Arms" by Ernest Hemingway
The spirit is willing but the flesh is weak, and if we're being completely honest the spirit isn't always willing either. from "The Wall" by John Lanchester
Who broke the world? They wouldn't say that they did. And yet it broke on their watch. from "The Wall" by John Lanchester
...complex problems often have depressingly complex causes... from "Bad Science" by Ben Goldacre
More treacherous still was the realisation that I had no knowledge of the ageing pilot´s existential inner self. Perhaps he believed in eternal life - a hazard which people in his line of work should be screened for [...] from Maya by Jostein Gaarder.
The main cause of shooting trauma is inappropriate use of a handgun. from the UEMS handbook for Otorhinolaryngology.
Aristotle, so far as I know, was the first man to proclaim explicitly that man is a rational animal. His reason for this view was one which does not now seem very impressive; it was, that some people can do sums. Bertrand Russell "An Outline of Intellectual Rubbish" in "The Portable Atheist" by Christopher Hitchens
"You have no respect for excessive authority or obsolete traditions." in "Catch 22" by Jospeh Heller.

*****
About 200 years ago when I finished school and started university I suspected to be in danger of becoming a professional idiot and started the project of reading all the Nobel Laureates (those in literature of course), a project I almost completed but is still running (after all, there's a new one nearly every year). Anyway I now know that some of them write really strange stuff and I started reading some of the Nobel Peace Prize Laureates, but my new project is reading books by or about Right Livelihood Award Laureats:
2013 Hans Rudolf Herren: So ernähren wir die Welt