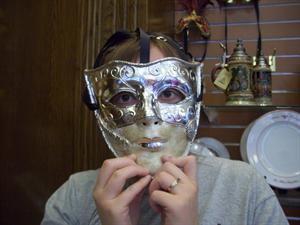 Does Snogging Count as Exercise?

The Demigod Files (A Percy Jackson and the Olympians Guide)

I would love it if people would journal books right away so I know they've been found! Congratulations on finding the book! Yes, it’s really free. You can read it and keep it, give it to a friend, or release it back into the wild for someone else to find. I only ask that you journal it so I know it wasn’t thrown in the garbage.

One of my 2014 Goals is to give away more books than I receive!
Books given: 17
Books received: 4

Books I read in 2014:
1. Bumped by Megan McCafferty
2. Sloppy Firsts by Megan McCafferty
3. Wheat Belly by William Davis, MD
4. Thumped by Megan McCafferty
5. Go for No! by Richard Fenton, Andrea Waltz
6. Big Girl by Danielle Steel
7. Act of Treason by Vince Flynn
8. True by Hilary Duff
9. Down a Dark Hall by Lois Duncan
10. Sweet blood by Pete Hautman
11. What I Saw and How I Lied by Judy Blundell
12. The Last Summer by Ann Brashares
13. Lucky by Alice Sebold
14. The Glass Castle by Jeannette Walls
15. Sun Stand Still by Steven Furtick
16. Life after Life by Kate Atkinson
17. Plain Truth by Jodi Picoult
18. Miss Peregrine's Home for Peculiar Children by Ransom Riggs
19. Divergent by Veronica Roth
20. Close to Famous by Joan Bauer
21. The Immortal Life of Henrietta Lacks by Rebecca Skloot
22. Caught by Harlan Coben
23. Insurgent by Veronica Roth
24. Allegiant by Veronica Roth

I read 18 books in 2013
Books I read in 2013:
1. Fifty Shades Freed by E.L. James
2. Divine Beginnings by PC Cast
3. Elixir by Hilary Duff
4. L.A. Candy by Lauren Conrad
5. Sweet Little Lies by Lauren Conrad
6. Waking up in Dixie by Haywood Smith
7. Elina Jensen's Double Curse by Vianka Van Bokkem
8. The Guy Not Taken by Jennifer Weiner
9. The Undomestic Goddess by Sophie Kinsella
10. Thank God I had a Gun: True Accounts of Self Defense by Chris Bird
11. The Grim Grotto by Lemony Snicket
12. Twenties Girl by Sophie Kinsella
13. The Penultimate Peril by Lemony Snicket
14. The End by Lemony Snicket
15. Sugar and Spice by Lauren Conrad
16. Devoted by Hilary Duff
17. Miracles Happen: The Life and Timeless Principles of the Founder of Mary Kay by Mary Kay Ash
18. Strengths Finder 2.0 by Tom Rather

I read 53 books in 2012
Books I read in 2012:
1. Matched by Ally Condie
2. The Lightning Thief by Rick Riordan
3. The Sea of Monsters by Rick Riordan
4. Phoenix Rising by William Johnstone
5. The Unbecoming of Mara Dyer by Michelle Hodkin
6. Beauty Queens by Libba Bray
7. Crossed by Allie Condie
8. Where She Went by Gayle Forman
9. Golden by Jennifer Lynn Barnes
10. Dawn by Elie Wiesel
11. Laurie Halse Anderson
12. Summer Lovin by Carly Phillips
13. The Kiss by Elda Minger
14. The Six Rules of Maybe by Deb Caletti
15. That Summer by Sarah Dessen
16. Dairy Queen by Catherine Gilbert Murdock
17. Home Invasion by William Johnstone
18. Heart of the Matter by Emily Giffin
19. Zen and the Art of Vampires by Katie MacAlister
20. So B. It by Sarah Weeks
21. Bitten and Smitten by Michelle Rowen
22. Can You Keep a Secret by Sophie Kinsella
23. Sex, Murder and a Double Latte by Kyra Davis
24. Remember Me by Sophie Kinsella
25. Blood Ties by Kay Hooper
26. The Debutante Divorcee by Plum Sykes
27. Wedding Belles by Haywood Smith
28. Goodnight Kiss by R.L. Stine (contained in Temptation)
29. Goodnight Kiss 2 (contained in Temptation)
30. The Boy in the Striped Pyjamas by John Boyne
31. The Perils of Sisterhood by Amy Alden
32. Good in Bed by Jennifer Weiner
33. Eat Pray Love by Elizabeth Gilbert
34. The Fortunes of Indigo Skye by Deb Caletti
35. The Red Hat Club by Haywood Smith
36. Certain Girls by Jennifer Weiner
37. Scribbler of Dreams by Mary E. Pearson
38. The Playboy by Carly Phillips
39. The Red Hat Club Rides Again by Haywood Smith
40.The Wednesday Night Witches by Lee Nichols
41. In too Deep by Amanda Grace
42. The Vow by Kim and Krickett Carpenter
43. The Nanny Diaries by Emma McLaughlin and Nicola Kraus
44. My Boyfriend Wrote a Book About Me by Hilary Winston
45. The Hostile Hospital by Lemony Snicket
46. The Carnivorous Carnival by Lemony Snicket
47. The Slippery Slope by Lemony Snicket
48. Where we Belong by Emily Giffin
49. The Saturday Supper Club by Amy Bratley
50. Good Grief by Lolly Winston
51. Fifty Shades of Grey by E.L. James
52. Fifty Shades Darker by E.L. James
53. Ascend by Amanda Hocking