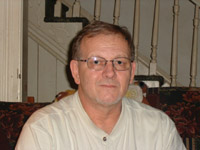 The Book of Fred : A Novel

Gates of the Forest

The Woman Who Walked into Doors

Travels with My Aunt

The Man in the High Castle (Vintage)

Midnight in the Garden of Good and Evil: A Savannah Story

Note from BC Support:

The following message came from a forum thread posted April 2007

jmg49
This message is to anyone who knew jmg49. His name was John. He is my father and he hasn't been on here for a while. This is because he passed away on March 12 of a heart attack. He loved reading and bookcrossing and he came on here quite frequently. This was something he really enjoyed and he will be greatly missed. He had a great sense of humour and cherished the relationships he had with people in his life. I just thought that I should post something on here in his memory. Thank you for helping make his life enjoyable.

jmg49 - Photobucket.com Some pics of our critters can be seen here :)

*** "Watchman" by Ian Rankin & "Death du Jour" by Kathy Reichs are what I'm currently reading: I usually have two books on the go; a light read for breaks at work etc. and and a more serious read for when I can sit down for a longer period of time to read. Bookring/ray books I receive are always read first, followed by books I know someone else wants.

I have been an active bookcrosser for a while now and it is one of the most enjoyable experiences I have ever had. The friendship and generousity of other crossers; the thrill of wild catches; journal postings of traded books; receiving books in the mail and reading them, all make for a very stimulating adventure.
I used to enjoy playing golf, but an injury and subsequent shoulder surgery have forced me to stop. Walking, reading & bookcrossing have replaced the golf. I still miss it but life must go on. I also enjoy listening to music while I'm on the computer. Mostly, I like classic rock and blues, but I have an open mind to try anything to see if I like it.
My favourite places to buy books are:
The Little Book Shoppe in Woodstock.
The Goodwill Store in Woodstock
The Salvation Army Thrift Store in Woodstock
amazon.ca
Merrifield's Book Store in Woodstock
Chapters in London.

***Bookrays and Bookrings Initiated By Me
All my Bookrays are international as well as perpetual and thus can be added to!

"There are two ways to slide easily through life: to believe everything or to doubt everything; both ways save us from thinking."
- Theodore Rubin