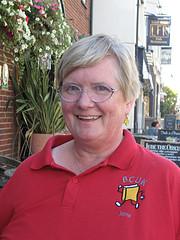 A World After Dying

The Woman Who Walked in Sunshine (The No. 1 Ladies' Detective Agency)

2021: I've just re-read my profile and am reflecting on how much has changed over the years and the current Covid pandemic has made a huge change to life. I have just started to wild release a few books again, having held back when I thought people would not want to be handling anything which might carry the virus. My unseemly high ToBeRead Mountain has diminished pleasingly as I have been fairly ruthless about not adding to the piles. Sadly, HonoraryBCDog passed away last year, a few weeks short of her 16th birthday. I have such happy memories of her releasing books. I recently completed a marathon read of Sue Grafton's Alphabet series and was pleased to find an immediate new home for most of the books. Sometimes I get disheartened about so many wild releases which are never heard of again and I wonder if I want to carry on BookCrossing, but I'm still here and will be for at least a while longer.

2016: I thought I'd do another little update as I'm going to be attending the UnConvention in Birmingham next week and I'm very excited about that. Looking forward to renewing old friendships and establishing some new ones, especially pleased to be able to meet some online friends face-to-face at last.

It hasn't been a VERY busy year BC-wise, but I have been keeping up with the reading and am pleased to report that my shelves are much less laden than they were, although there's a lot of progress still to be made. I've had to harden my heart and accept that there are some oldies which I am just NOT going to have time read again and I have let a lot of them go. I began, and have nearly completed, a marathon with Ann Granger's Mitchell & Markby stories. Just one more to read. It's been wonderful to live alongside the characters as their relationship progressed, to catch up with old acquaintances from time to time (I'm very fond of Father James Holland) and to know what they were talking about when reference were made to old cases. I'm looking forward to my next marathon!

I have happily donated to RABCK.COM because I love sending surprise RABCKs and I hope many other BookCrossers will consider donating to keep this website going. If by any chance you should want to surprise me with a RABCK and can't get my details from rabck.com for any reason, please PM my friend Dolph1n who will pass on my address.

2015 update: Not a lot of change in the last 3 years, I have to admit! I have managed to reduce my over-burdened shelves a little bit, but I keep buying (and reading) more and more e-books, which is BAD. I have now decided I really must have a thorough, deep-down, no sentimentality de-clutter so I am going to try really hard to get rid of a lot of books. I have already offered some as RABCKs to other BCers, will Wild Release some, donate a few to Charity Shops and let the oldest and tiredest ones go to Book Heaven. Now off to do a batch of registering.

2012 update: There may have been less activity on my bookshelf recently, but I am still reading! I haven't so many TBRs from other BCers at the moment, so I am actively pursuing my dual goal to re-read many of my old favourites (and then consign the ancient dilapidated paperbacks to Book Heaven) and reduce the over-crowding on my shelves. Among the authors I am revisiting are Monica Dickens, Georgette Heyer, Anya Seton and others. From time to time I am given bagsful of unwanted books to dispose of so I need to do more wild releasing but Wrexham is rather stony ground!


I was told (briefly) about BookCrossing, made a Note to Self to look at the site and never got around to it for about 6 months. Big mistake! I missed out on 6 months of living, breathing, eating and sleeping BookCrossing, which is a horrendous thought to have to live with.

Apart from the great love of books and reading which I have had nearly all my life, the very concept of BookCrossing is the sort of thing which has huge appeal for me. Shortly after finding BookCrossing, I discovered the UK mailing list, BookCrossingUK which I would also heartily recommend to all who have some tenuous connection with the UK.

I am often accompanied on my BookCrossing activities by HonoraryBCDog. She loves wild releasing!

I am not a fast reader and I have numerous interests apart from reading, so my turnover is not huge. I just wish I could learn to control my urge to acquire books, so that it was more in line with my reading rate. I love taking part in Rings and Rays, but have been trying very hard recently to resist most of them in order to reduce the height of Mount TBR and free up some more books for wild releasing and RABCKing.

I have signed up for RABCK.com and am getting a real buzz from checking out people's Wishlists and sending off surprise packages. Check it out!

Because I've been asked so often, here's the explanation for my BC screenname. It comes from the house named Jalna, which is at the centre of the 16 books of the Whiteoaks saga by Mazo de la Roche. It is about 45 years since I read my first one (Young Renny) and became totally and utterly hooked. Since then, I have read all 16 books many times over, some more than others, but often the whole series from start to finish without a break. When I reach the end, I weep. I now have a hardback collection of the books, and plan to start another Whiteoaks marathon in the near future.

"He felt about books as doctors feel about medicines, or managers about plays -- cynical but hopeful."