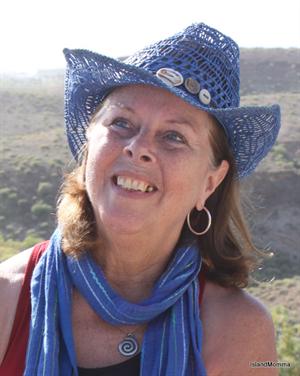 A Shark in the Bath & Other Stories

Go Your Own Way: Women Travel the World Solo

The Perfection of Yoga

The Man Who Loves Giants

My Big Book of Questions and Answers

A Journey of One's Own: Uncommon Advice for the Independent Woman Traveler

Backgammon in a Week

Who I am and Where I am
I was born in the flat and damp north west of England, but have lived on the island of Tenerife in the Canary Islands (off the coast of West Africa, but part of Spain) since 1987. I write, I blog and I take photographs, and when I have money I travel. As well as losing myself in a good book, I love hiking, snorkelling, food and wine, Blues and its origins in African music, good conversation, my dog, but most of all my sons, who are adult now, but still "my kids"! I'm concerned about the state of the world and interested in what we can do to make it a better place and conserve its beauty.

Me, Books and Bookcrossing
I've devoured books almost as far back as I can remember, encouraged by my lovely mom and my inspiring aunt. Books are my refuge, my school, my pleasure (sometimes guilty, sometimes not), my window on the world, and my abiding passion. I tend to travel narrative (in the widest meaning of that), biographies, history, and poetry. I prefer "modern classics" (if that isn't an oxymoron) when it comes to fiction, but am often pleasantly surprised by something new or something old which I've put off reading.

Trading is difficult, because postage from here is expensive, and, there are so many with which I'm loathe to part as yet, I'm sure the time will come when I downsize my book collection too. However, if you won't be offended by a "no", there is no harm in asking, is there? :=)

I used to list the books I read each year, and count how many I read. That was when I was in a dead end job and had plenty of time, but these days life is much busier and more complicated than it was when I used to do that, so, when I remember I'll list any I read in random order, in fact. That way if your tastes and mine are similar, let me know.This written 2012. I've made some wonderful friendships which began on Bookcrossing, though I don't have time now to spend as much of it here as I once did, but I'm always happy to hear from anyone with similar tastes, especially in book! Oh, and I don't really do reviews either. First I hate the ones which tell you the entire plot before you've even bought the book and second, I think we all have different tastes and that's fine. It's interesting to discuss why we like or dislike a particular book, but our opinion isn't the only one out there!

The books I've seriously enjoyed:
Ghosts of Spain by Giles Tremlett
Into the Wild by Jon Krakauer
Sun After Dark by Pico Iyer
Into Thin Air by Jon Krakauer
The Beckoning Silence by Joe Simpson
Dispatches from the Edge by Anderson Cooper

The Books I've read:
Walden by Henry David Thoreau
Vroom with a View by Peter Moore
The Road Home by Rose Tremain
Three cups of Tea by Greg Mortenson & David Oliver Relin
One for The Road by Tony Horwitz
Female Nomad & Friends by Rita Golden Gelman
The Art of Non-Conformity byt Chris Guillebeau
Major Pettigrew's Last Stand by Helen Simonson
The Dangerous Summer by Ernest Hemingway
Never Let Me Go by Kazuo Ishiguro
The Shadow of the Sun by Ryszard Kapuscinski
A Journey of One's Own by Thalia Zepatos
Big Sur by Jack Kerouac
The Angel's Game by Carlos Ruiz Zafón
The Motorcycle Diaries by Ernesto "Che" Guevara
South of the Border, West of the Sun by Haruki Murakami
The Solo Traveler's Handbook by Janice Waugh
Awakening the Giant Within by Tony Robbins
Hemingway Adventure by Michael Palin
In Patagonia by Bruce Chatwin

And the ones I abandoned:
1. Blindness by Jose Sara
2. Back on the Road by Che Guevara

"What a miracle it is that out of these small, flat, rigid squares of paper unfolds world after world after world, worlds that sing to you, comfort and quiet or excite you. Books help us understand who we are and how we are to behave. They show us what community and friendship mean; they show us how to live and die."