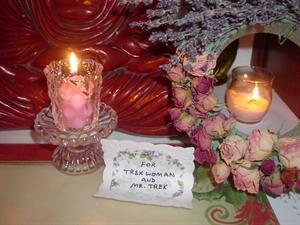 Harry Potter and the Chamber of Secrets

Rockin' Around the Christmas Tree

A Gift For a Rogue

NOTE: I moved 09/17/16..If you have a Grand Island address you have the correct one. Day job awesome and car reliable. 2/3 of the way through French. Found love and misplaced it. Will wait for the real thing , Baby! Everything's looking up.

I do look in here occasionally and am happy to say when I get tired I just curl up and read to start moving the TBR pile along! My bookcrossing family is never far from my mind..... xoxoxo.


Don't buy it....just if you happen to find it!
If you obtain the Volumes for me I will find something you need in trade and/or bake you TONS of Cookies.

Will barter for tins of cookies, quilts, homemade jam, potpourri, bath salts, dream pillows...Just ask me and tell me what you will trade!


ASK ME ABOUT TOASTMASTERS, I'd love to tell you all about it! It is an opportunity to tell people all about the things you read!


A very avid reader, since about age ten, my early memories of reading books are of being disciplined in class for reading a book, open on my lap, under my desk, rather than devoting my attention to the subject that was being taught.

Once on vacation, about age fifteen, I left a book on a hill by a highway while going in for dinner. In a hurry, I figured the book would be waiting when I got back. (It was a rural area.) When I returned I was dismayed, for it was gone! Guess that was my first true "Wild release."

My favorite author was a woman named Taylor Caldwell. As a young adult I could not get my hands on enough of her writing. I find myself drawn to fiction, and old herbal remedy books that contain history between the recipes the early settlers here, once relied on.

In addition to the above, I have collected fairy tales and folk tales, from around the world, to recite to young and old, on special occasion. Whilst working on Web Design, it is not unusual to find me reading books, on the internet, more often than looking for deals at library book sales and garage sales. My method of collecting a good story may have changed, however, my love for reading has not.

Today: I adore the work of Tasha Tudor and wish hard to retire into her simpler, more joyous lifestyle. Blessed Be Tasha who passed away June, 2008 at 92 years of age. As my family grows and moves out to the ends of the earth and beyond, I find myself establishing new relationships that I pray I know for the rest of my life and into the next. I want to see Iceland before I die. I want to die in England a long long time from now.

Working and finally driving that reliable vehicle! Thank you bookcrossers for all of the positive energy!

P.S. I Love You by Cecelia Ahern
Forever by Pete Hamill
Abarat Book Two by Clive Barker
Altered Carbon by Richard Morgan
Absolute Friends by John Le Carre
World of Darkness, Dark Destiny, Proprietors of Fate, by Various Authors
Murder in the Place of Anubis by Lynda S. Johnson
Death of a Village by M C Beaton
Desperation by Steven King
Cuba by Stephen Coonts
The Regulators by Richard Bachman
Book of Shadows by James Reese
Quiet as a Nun by Antonia Fraser
dogsbody by Diana Wynne jones
Seaglass by Anita Shreve
Brief Encounters with Che Guevara : Stories
by Ben Fountain
Treasure Island by Robert Louis Stevenson
Curse of Treasure Island by Frances Bryan
So You Want to Be a Wizard by Diane Duane
Woken Furies by Richard Morgan
Disclosure by Michael Crichton
Legacy of Terror by Kate Cameron
LT's Theory on Pets (Audio) by Steven King
Lonesome Dove Audio Book by Bill Wittliff
On a Pale Horse by Piers Anthony
Bearing an Hourglass by Piers Anthony

Tuesdays With Morrie by Mitch Albom
The Lost World by Michael Crichton
Holy Fools by Joanne Harris
The Time Traveler's Wife by Audrey Niffenegger
Son of a Witch by Greg Maguire
The Pink Fairy Book by Andrew Lang
Going Back by Penelope Lively
A Christmas Story by Jean Shepherd
Feast of All Saints by Anne Rice
The Rose and the Beast by Francesca Lia Block
Soft Pretzels with Mustard by David Brenner
The Island of the Day Before by Umberto Eco
The Five People you Meet in Heaven by Mitch Album
The Martha Rules by Martha Stewart
Snow-Walker by Catherine Fischer
Ozma of Oz by Frank Baum / Mary Weber
The Witch Next Door by Norman Bridwell
High Wizardry by Diane Duane
Night Visitors by Ed Young
What ever happened to Janie? by Caroline B. Cooney
Voice on the Radio by Caroline B. Cooney
Ghosts on the Coast of Maine by Carol Schulte
Troubling a Star by Madeline L' Engle
Bread upon the Waters by Irwin Shaw
Tommyknockers by Steven King
A Child's Book of Faeries by Tanya Robyn Batt
The Dark Half by Steven King
Bag of Bones by Steven King
Insomnia by Steven King
Gerald's Game by Stephen King
The Talisman by Stephen King and Peter Straub
A Witch Grows Up by Norman Bridwell
EYES OF THE TAROT BRUCE COVILLES CHAMBER OF HORRORS 3 (Chamber of Horrors)
Birdwing by Rafe Martin
Digital Fortress by Dan Brown
Deception Point by Dan Brown

Books Read 2008
Candlelight Recipes for Magic by Marian Singer
Queen of the South by Arturo Perez Reverte
At First Site by Nicholas Sparks
Hurricanes and Twisters by Robert Irving
The Doomed Planet by L. Ron Hubbard
Twice Told by Various Authors about Artwork by Scott Hunt
The Devil Wears Prada by Laura Weisberger
Faery Magic by Mary Jo Putney, Jo Beverly, Barbara Samuel & Karen Harbaugh
Stowaway by Karen Hesse
The Autobiography and Other Writings by Benjamin Franklin
The Cage by Ruth Minsky Sender
Antique Fairy Tales illustated by Judy Masrangelo
Twilight by Stephanie Meyer
New Moon by Stephanie Meyer
Stiff, The Curious Lives of Human Cadavers by Mary Roach
Upon a Midnite Clear by various romance writers
The Season of Passage by Christopher Pike
The Leopold Contract by George Wolk
Anansi Boys by Neil Gaiman
A TON of National Geographics Magazines
(only for the articles, really!)
5-Minute Massage by Robert Thé
Sorceress by Celia Rees
Eclipse by Stephanie Meyer
The Magic Bookshop by Kala Trobe
Lisey's Story by Stephen King
The Lucifer Key by MacPherson
Silent Witness by Nigel McCrery
Breaking Dawn by Stephanie Meyer
From a Buick 8 by Stephen King
I am a Nyphomaniac by Dr. LT Woodward
The Choice by Nicolas Sparks
My Summer of Love by Helen Cross
Masquerade of the Red Death Volume One by Robert Weinberg
Masquerade of the Red Death Volume TWO by Robert Weinberg
Masquerade of the Red Death Volume Three by Robert Weinberg
He Sees You When You're Sleeping by Mary Higgins Clark

Books read 2010:
The Infernal Desire Machines of Doctor Hoffman by Angela Carter
The Devil's Larder by Jim Crace
Rose Madder by Stephen King
McGowan's Call by Rob Smith
McGowan's Retreat by Rob Smith
What Child is This by Caroline B. Cooney
A Wedding in December by Anita Shriev
Indian Summer of the Heart

Island in the Sea of Time by S M Stirling
Against the Tide of Years by S M Stirling
Children of Light by Rob Smith
The Demon in the Freezer by Richard Preston
Lord of the Isles by David Drake
A Western Family Christmas by Millie Criswell,Mary McBride & Liz Ireland
Valentines Day by Jayne Bauling
A Lion Among Men by Gregory Maguire
My Date With Satan by Stacey Richter
Bias by Bernard Goldberg
The beautiful Ship by John B. Prescott
50 Ways to Pamper Yourself by Stephanie Tourles
What The Dickens by Gregory Maguire
Interworld by Neil Gaiman and Michael Reaves
The Beautiful Ship by Prescott
The Holdouts by Sherry Clements
Night Voices by Rob Smith
Keelhouse by Rob Smith
The Kennedy Women by Laurence Leamer
Swan Song by Robert R. McCammon
Diana Her True Story by Andrew Morton
Superstitious by R L Stine
Vampire Hunter D Raiser of Gales by Hideyuki Kikuchi
Moondust by Thomas Burnett Swann
Black Eyed Suzie by Susan Shaw
The Ciderhouse Rules by John Irving
Johnathan Strange & Mr. Norrell by Susanna Clarke
The Sisterhood of the Traveling Pants by Ann Brashares
Paul of Dune by Brian Herbert & Kevin J. Anderson
When Happily Ever After Ends by Lurlene McDaniel
The Sunrise Lands by S M Stirling
The Scourge of God by S M Stirling

McGowans Pass by Rob Smith
The Sword of the Lady by S M Stirling
The High King of Montival by S M Stirling
The Tears of the Sun by S M Stirling
Full dark No Stars by Stephen King
Death Storm by Anne Knight
The Golden Unicorn by Phyllis A. Whitney
The Christmas Secret by Donna Van Liere <---- read twice!
The Skull beneath the Skin by PD James
Abarat by Clive Barker
Giants in the Earth by O.E. Rolvaag
Red Dragon by Thomas Harris
The Emperor of Ocean Park by Steven L Carter
Bespelling Jane Austin by Mary Balogh, Coleen Gleason, Susan Krinard and Janet Mullany
Coroner by Thomas T Noguchi
Dinner at the Homesick Restaurant by Anne Tyler
The Missing Matchmaker by Cindy Holbrook
Hannibal by Thomas Harris
A Bend in the Road by Nicolas Sparks
Illusion by Frank Peretti
Eat Pray Love by Elizabeth Gilbert
Six Nuns and a Shotgun by Colin Watson
The Other Boleyn Girl by Philippa Gregory
The Mystery of the Fool and the Vanisher by David and Ruth Ellwand
Chainfire by Terry Goodkind
Floating Dragon by Peter Straub
Lord of Mountains by S M Stirling
The Phantom Cyclist and other short stories by Ruth Ainsworth
When Beggars Die by Richard Haley

2016 Reading lots of magazines and cookbooks this year so I could be lighter when I move.

Lots of articles in Food and Wine Magazine.
The Desert and the Blade by S.M. Stirling
Book of North American Birds by Readers Digest (yes, I am birding)
The Complete Encyclopedia of Signs and Symbols by Mark O'Connell and Raje Airey
The Bitch in Your Head: How to Finally Squash Your Inner Critic by Dr. Jacqueline Hornor Plumez
Ultimate Power by Linda West

The ray went to BOOKWORMINUSALL

8/09 Participated in a bookring for The Faery Reel: Tales From the Twilight Realm
by Ellen Datlow, Terri Windling Thank you imawinn2 for hosting and hostile17 for suggesting.

June 2012 Participated in Hostile17 's Genre Bookbox! OMG In and out of my house in two weeks! Wish I was always that prompt.

Happy Holidays! Whichever you do celebrate! May the men and women overseas come home soon. (Sad that this statement has been up here for years.)


My birthday is December 28 and ALMOST everyone forgets. (I do stand corrected here) I am always remembered by: Bookdrunkard with a happy birthday thread and a song on my voicemail. Thanks.


Blessed Be and I give Thanks for the blessings received in my household!

YOU ARE A BLESSING

Not all of the books I registered were my own,but were finds and lots "gifted" to me as people cleaned house after garage sales, etc., some curiosities I may keep till I die, but then they will be found. Some available s will never be wild released but discretion-ally handed out or mailed as some things are not appropriate to leave on a park bench.