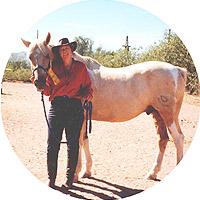 Year of the Pig (Doctor Who)

The Penelopiad: The Myth of Penelope and Odysseus [UNABRIDGED]

No Beast So Fierce

I think I've been a book addict since I was old enough to hold one. 😉. One of the earliest books I remember loving was a Little Golden Book, "The Colour Kittens." Another I recall from a little later, was a story about a girl{?) who was accidentally locked in a library overnight. I, of course, thought that was most fabulous! By the time I was 7 or 8 I was was reading Lamb's "Tales from Shakespeare" over and over, and by 8 or 9 my parents were taking me to see Shakespearean plays. I was also madly in love with Dr. Doolittle books(NOT the disneyized version)--I so wanted to be him, to be able to talk with the animals!! I think I was in 8th grade when my Dad handed me Azimov's "Foundation Trilogy;" that began a lifelong love affair with Science Fiction.

Besides being a reader, I'm a Prop Master for a theatre, an actor and techie. And a Grandmother, Mom, auntie, bruja, and radical left-wing woman!

I adore equines of all sorts, and both ride and drive carriage. The gorgeous guy with me in the pic is Sir Gawain, more commonly just referred to as Sir G. I'm not usually into blondes, but I've made an exception for him 😉

*Solstice, Christmas, whatever-holiday-you-celebrate cards
*Release supplies!!
*Wings
*”Oppem” return addy labels
*Earl Grey, Lapsang Souchong, or Chamomile teas~
* washi tape
*labels and/or coasters from your local craft/micro breweries
*vintage "risqué” postcards
*bones~~ especially small skulls and vertebrae, with notes on
when/where you collected them
*feathers ~with a collection note
*stamps ~ unused for sending more rabcks or used for donating
*anything Dr. Who
*sea glass
*round cedar for smudging (we only have the flat cedar here)
*time,food, or $s to your favorite shelter and a note to let me know
*a photo you took of something you find beautiful
*postcard of a place or art special to you, with a note about
* A tea cozy
*anything made by you :)
*beads for Navaho friends who create and sell~~don't send
these to me, rather pm for an address~


all below I know needs updating and editing..... and I long ago gave up on keeping track of rings, rays, boxes....


NOTE: all but one of my wild releases really are. I did do release notes for one controlled release very early on, before realizing those should be journaled. But the numbers are ok-- I just had one journalled (months later) that I'd forgotten to do release notes on!

I finished Paolo Coehlo's Pilgrimage this morning, and went to take a gander at his website, where I found this, which I would like to share:
paulocoelhoblog.com/---/" target=_blank>Manual for conserving paths


My first very own bookring is WICKED Elphaba almost made it home again, but alas, she fell off the world in AZ, and was never heard of again. :(

#3 Women of the Ukiyo-E is a beautiful colouring book for semi-grown-ups :)

#4 Foreigner by CJCheeryh --this is the first of a trilogy, going out as a spiral

#15 www.bookcrossing.com/---/6229051/ Coyotes: A Journey Through the Secret World of America's Illegal Aliens HOME!

www.bookcrossing.com/---/11473228/ Anything But Romance Shrinking Bookbox

Gradually, I will be registering Mom's books under tenetene, so please take a look there, especially if you like to read Mysteries or Fantasy, those being the genres of which there will be the most.


Bookrings which I've joined, read, and have sent on their way:
* these entries are sadly behind....
www.bookcrossing.com/---/3395546 Female Chauvinist Pigs : Women and the Rise of Raunch Culture by Ariel Levy
started by lolamarie --thought-provoking!!!

The Nine Emotional Lives of Cats : A Journey Into the Feline Heart started by PaperbackPal
--much for cat-lovers to identify with!


Parineeta hosted by gussy 916
--an early 20th C romance in a much more traditional India--Really cool that these two rings of gussy's arrived back-to-back!

The Gods Themselves bookray masterful SF!
hosted by efs300

The Smoke Ring had to replace the original--it was worth it, to read this amazing Niven!
hosted by Cayenne-UK

The Penelopiad : The Myth of Penelope and Odysseus

Journal "How to be alone" (still open)
by Various Bookcrossers

The Elegant Universe : Superstrings, Hidden Dimensions, and the Quest for the Ul (ray)

The Man who Sold The Moon

She Flies Without Wings: How Horses Touch A Woman's Soul-----here--next in line

www.bookcrossing.com/---/3841514 I Hate Myself and Want to Die: The 52 Most Depressing Songs You've Ever Heard

Alas, I've given up on

it's been a year since it was sent...just hope the books are being read somewhereand not moldering away in a wharf warehouse!


I want to edit/condense the following, but don't know when I'll get the round tuit; so for now I've just moved them below the basic shelf notes.
***************************************************************************************
On Sept 4th 2007, after a brief courageous fight, my mother left us. (I hate the phrase "I lost" my Mom-I certainly did not misplace her!).
After working hard and long to recover from her broken shoulder, she was thrilled that she could finally drive again (be independent!) and travel once more. Her hard-won health was all too brief. While visiting my(remaining) sister, she fell and broke her femur. Surgery went well, she came through with flying colors, began rehab....and then threw a clot, which lodged in and killed her small intestine. She underwent three more surgeries in the next week, but the necrosis continued, and there was nothing more that could be done. At least there was time for her family to come, to say good-bye, to support one another. And the Drs. "broke the riules," telling the ICU to let all of us in , not just 2 at a time; my brother brought his guitar, and we sang all the songs we grew up singing as a family. And we shared memories--Mom even heard a few tales of our escapades she'd never known about.


This Spring I took on mucho work—so much so that shows were not only one after another, but two or even three stacked up overlapping. Kept me from brooding……

The past year and a half has been truly awful. Jan 2, 2006, my Mom fell, shattering her upper arm. Surgery, pain, drugs, physical therapy, pain, not healing, not healing…..she was unable to be alone, so I worked only half-time, my sister Miceala and I both caring for her. In June, she had more surgery; this time her entire shoulder was replaced, and finally, slowly, she began to heal. But at 83 and after so long unable to do anything, her recovery was extremely slow, and Miceala continued to come in the afternoons so that I could work half-time.

Then….then Miceala’s sudden unexpected death. The phenomenal shock was as if Sir Gawain had kicked me in the chest! Worse. While my body was intact, my heart and spirit were a shambles…..

Now, the season over, and not having been home to the desert for far too long, I’m on my healing journey. I drove through Utah’s farmland, through the red rock country, camped at Hovenweep, and lay under the Milky Way, falling into the Night Sky. Relations bless my journey….Raven, Horse, Turkey, Snake….have given spirit-gifts of transformation, magic, transmutation, give-away…they help me heal….. I have been graced to see elk, deer, jackrabbit, buffalo, and myriad winged ones. I bake under the beating sun. I ride in the desert, thanking Brother Wind for the cooling breeze. Bit by bit, I return to myself.

To those who have sent kind words, thoughts, energies, I thank you. It amazes me how much the kindness of others really does ease what must be endured.

And to those who have been extremely patient with me--Thank You ! May the Book Goddess shower Blessings upon You!!

And if you or anyone you know suffers with Fybromyalgia, PLEASE go to this url, where there is a recent article on Dying to Feel Better, which used Miceala’s death as one of the local instances.
deseretnews.com/---/0,1249,660219298,00.html


Since I'm not doing much in the way of individual notes, I want to let you know why I'm currently a poor bookcrosser and beg your patience and understanding.....

The holidays were an absolute nightmare , and tho I'm back to work this month, the rest of my life is still an unfocused mess. I'm trying to get myself moving, to get books moving...but I just don't seem to be making the progress I'd like. Coupled with the pain is the shock--the complete shock and wrongness of her death. I'm trying to get myself gathered enough to respond to pms, and get everything journaled and on it's way that should be. I did try hard to get (belated) thankyous to all who sent Holiday Wishes--if I missed you, I am really really sorry!

"Life is too short to read bad books."