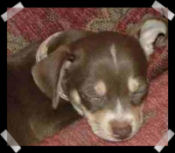 The Mouse and the Motorcycle

Nancy Drew 30: The Clue of the Velvet Mask (Nancy Drew)

Lizzie McGuire Mysteries: Get a Clue!

Are You There God? It's Me, Margaret

Bridget Jones: The Edge of Reason

Can You Keep a Secret?

The Five People You Meet in Heaven

Hi and welcome to our bookshelf!

I heard about bookcrossing from a good friend Bulfinch and was immediately hooked!

I have always loved to read, mostly fiction, and have an elementary school age daughter who is an avid reader as well. This seemed like a fun way to get more out of something we already both enjoy.

We had our first wild catch happend in July 2006, and that was all we needed to cement the concept for us. We left a book at a little vacation ranch in Colorado over the July 4th holiday, and it has made its way to Oklahoma.

We are happy to do trades (US only sorry) from our availables or TBR shelf, but we like to keep things moving so please don't request a book if you have no traveling books in your bookshelf.

We’ve sent books for an M-Bag that will travel to India, and also made releases in London, Portugal, Sweden, Germany and New Zealand thanks to another well traveled friend!

We participated in The Animal Release Challenge 2006 sponsored by Secretariat. We released 27 books and have already had 4 catches! We had a blast and will surely be looking for more challenges to participate in!

For One More Day - by Mitch Albom Hosted by momrisner