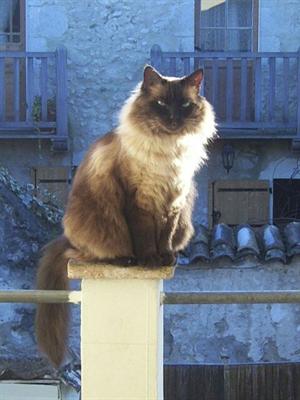 Death on the Downs: The Fethering Mysteries

The Way Through the Woods (Inspector Morse Mysteries)

The Patience of the Spider

Adrian Mole and the Weapons of Mass Destruction

Through a glass, darkly


"Books are engines of change,windows on the world, and (as a poet has said) “lighthouses erected in the sea of time.” They are companions, teachers, magicians, bankers of the treasures of the mind. Books are humanity in print." Barbara W. Tuchman


I'm a mother of 3, grandmother of 4,and live with one rescued cat EllieMae, rescued from the Bergerac SPA shelter, via the Phoenix Association animal rescue group and Elsa the dog, directly from the Phoenix Association (see my home page above), a very loving, but scared lab mix, rescued from a horrible home situation. My main passions are books, painting, travel and animals, especially animal rescue.
January, 2020 RIP Bertie, our rescued cat from the Bergerac SPA. (See his photo above)

Bluenoser: a nickname given to Nova Scotians. The origin of the name, legend has it, came from the fishermen in days gone by, who wore thick, home-made sweaters with the lanolin left in the wool and the wool dyed a traditional dark blue. The damp, fog-bound fishing grounds around the Atlantic Provinces made the fishermen's noses drip. Too busy to fuss around with hankies the fishermen wiped their noses on their cuffs and some of the dye came off the damp wool onto the end of their noses. Hence they had blue noses.

APRIL 2015 - Sadly the price of stamps and the paperwork now involved in posting parcels in France has forced me to stop releasing books by post. It's cheaper and easier to send book gift certificates or second hand books from Amazon in the country of recipients.

"Children are made readers on the laps of their parents."