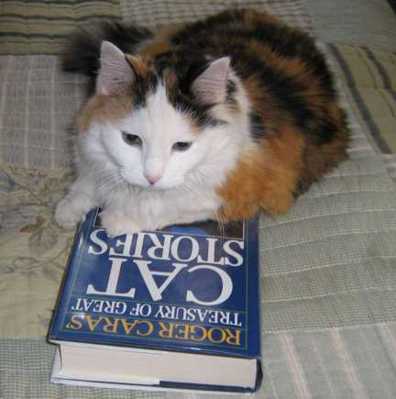 At the Mercy of the Queen

The Once & Future King

I Had a Cat

That's what Friends Aren't For

The Watsons Go to Birmingham

Notes From The Midnight Driver

The Hunt for the Seventh [7th]

I'm the Steward of 4 Little Free Libraries in Hopkinsville, KY. My first one - installed in August 2013 - is #7669 at Jeffers Bend Environmental Center. Just follow the Lake Trail until you come to a fork. Take the right trail with the red marker. The LFL is inside the bird observation hut overlooking the lake.
In June 2017 the city installed 4 more LFL's. It was my suggestion, but the libraries were built and painted by the Christian County High School JROTC and installed by Parks and Recreation and Public Works. They are at the North Drive and Pardue Lane trail heads of the Greenway and the downtown fire station playground. Come visit! www.eclipseville.com/

The picture above is my beloved kitty "Pud" Bagwell in one of her favorite spots - on whatever book I was reading. She was dumped on my parents' farm by someone who obviously didn't know how wonderful she was. She was with me for 17 years, until the vet recommended that we put her to sleep on August 23, 2007. I've never known a more loving and lovely animal, and she'll always be remembered and missed.

I'm pretty much a hermit since retiring from my "life of crime." All those years around jails and courtrooms have made me thoroughly appreciate being at home. I have my computer, kitties and books here; why would I want to leave? :-)(I realized that I left out Jim. Jim is here too!)

I had been a member of BookCrossing for more than a year and was still having a hard time releasing books. I held them too fondly and jealously. There seem to be very few members locally, so I finally decided that I would have to release some books if I wanted to spread the word. Now I understand the thrill of a release and the even bigger excitement of a journal entry when I least expect it. On the night we were married, my husband and I tossed a bottle into the ocean with a copy of our wedding blessing inside. Two months later, 1000 miles away, a woman found it on the beach and took the time to send us a message of her own. Bookcrossing feels just like that.

My wishlist for the International Birthday RABCK:

-Teen and children books for my 5 Little Free Libraries OR book bomb a LFL near you and send me a note to tell me about it
-Books for the local veteran's shelter which houses 50 men OR drop books at a local shelter or retirement community and send me a note to tell me about it
-Seaglass and a note to tell me where it was found
-Valentine-themed paper or stickers for making cards to send to the VA hospital (no glitter)
-Pressed/elongated pennies from outside the USA for my husband's collection
-Handkerchiefs (I'm trying to use fewer throw-away tissues)
-BC labels for registration or cover of book (homemade or store bought-especially for kid or teen books). I'd also appreciate links to labels I can print.
-Postcard from your town/country. Tell me something about your town or country.
-Geocaching travel tag/bug, registered or not
-Anything (postcard, photos) from County Tyrone, Northern Ireland (My 6th great grandfather was born there in 1720. He died in the US in 1776.)
-Wings/bikes
-Receipts with Kellogg, Keebler, Cheez-It, MorningStar Farms, Famous Amos or Pringles items to use for free books. These can be photographed and sent digitally but must be less than 30 days old. Here's a link with all the eligible brands: www.kelloggsfamilyrewards.com/---/brands.html
-Wishlist books or cozy mysteries are always appreciated, but I'm behind on reading books from last year. It may take a little while before the book you send is read and back into circulation.
-I don't enjoy tea or coffee.
~~~~~~~~~~~~~~~~~~~~~~~~~~~~~~~~~~~~~~~~~~~~~~~~~~~~~~~~~~~~~~~~~~~~~~~~~~~~~~~~~

My National Park Service Passport has inspired me to make a challenge for myself. It's doubtful that I'll ever have a stamp from every national park, but I can reasonably expect to visit all of Kentucky's state parks during my wanderings. I've decided to release a book at each state park which I visit and keep track of my progress here.

And just in case I do make it to all the National Parks, here's a list of the books I've released so far:

3/12/05 – Chattanooga National Military Park in Chattanooga, Tennessee - Around the World in Eighty Days Caught by a new member on 3/12/05

4/16/05 – The Trail of Tears National Historic Trail in Hopkinsville, Kentucky - The Sum of All Fears Caught by a new member on 5/1/05

6/22/07 – Adams Presidential Birthplaces in Quincy, Massachusetts - To Kill a Mockingbird

6/28/07 – Quinebaug and Shetucket Rivers Valley National Heritage Corridor in Sturbridge, Massachusetts - Wild Orchard Caught by an AF on 7/01/07 and re-released in Moultonborough, NH on 7/14/07

6/29/07 – Gettysburg National Military Park in Gettysburg, Pennsylvania - A Good Scent from a Strange Mountain Caught by an AF in North Carolina on 7/04/07

9/14/08 - Lowell National Historical Park in Lowell, MA - A Short History of Nearly Everything

09/16/10 - Salem Maritime National Historical Site in Salem, MA - The Lace Reader Journaled by a new member on 10/12/10 and rereleased in Nova Scotia.

05/04/2015 - Little River Canyon National Preserve in Fort Payne, AL - The Girl With No Shadow Journaled before I could make release notes by an AF.

10/13/2016 - Manassas National Battlefield Park in Manassas, Virginia - Truly Kentucky: A Culinary Gift from the Bluegrass Journaled by a new member on 10/17/16.

Wow! I really did move here from Florida! But how did they know that?

You surely were't born and raised in the Bluegrass! You must have moved here from Florida! I think it's time for you to hit the library and do some serious research!!!!

"A library is thought in cold storage."