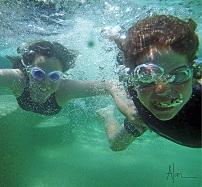 The Man from Beijing

Brunetti's Venice Walks Through the Novels

The Tuscan Year: Life and Food in an Italian Valley

A room with a view

The Penguin Book of Food and Drink

The Hill of Devi (Travel Library)

Quite a few books registered here were donated to the Book Flood my husband and I managed for schoolchildren in Borneo when DaveDELC was training teachers there in 2002 - 2006. Thanks to all those generous bookcrossers!

I work as a part-time illustrator and a bookshop assistant, mainly selling books and historical postcards on the net. I read mostly novels, Ondaatje being a favourite, and mystery/detective fiction. I wish Nick Earls was more prolific. Bookcrossing has been a godsend for me, particularly the Forum, being able to chat and talk about books ad infinitum to other bookpeople. Thanks to Sarita03 and Skyring for introducing me to bookcrossing.

Note that by permanent collection I mean precious, and may be willing to lend these books only to bookcrossers I know and trust to return them.


Bookrings, rays, acts of kindness, random and otherwise:
1.Coastliners by Joanne Harris, begun by buchsuch X
2 Holy Fools by Joanne Harris, begun by buchsuch (lost in post)
Also my own little ring, just on its way to Canada
3.Land below the wind by Agnes Newton Keith X
A little taste of the above:
"My husband has been in Government service in North Borneo for fourteen years. As well as being Conservator of Forests and Director of Agriculture he is Honorary Curator of the State Museum, Game Warden, collector of strange beasts for distant scientists, patron of pauperised natives and the repository for unwanted animals. He collects old Chinese porcelain, writes papers on scientific subjects, is recording a Murut vocabulary, speaks Malay well enough to be distressed by mine, and cites Oxford University Dictionary English to the confusion of my American.
Before we were married he told me he hated cats, letters of introduction, leftovers, people who cut down trees, co-educational schools, bombastic phrases and women in shorts.
I like cats and leftovers, and I think that a good bombastic phrase and a woman in shorts can go a long way at the proper time."

4.Worst first sentence, begun by boreal
5.Running with scissors, begun by jamesmum
6 Balzac and the little Chinese seamstress, begun by Eucalia
7.So help me Dog by Joe Bennett, begun by Gwilk X
8.To Reach the clouds by Philippe Petit, begun by robert-walker X
9.True to form, by Elizabeth Berg, begun by jessibud X
10.Message in a bottle, by Nicholas Sparks, begun by hotflash X
11.In the memory of the forest, by Charles T.Powers, begun by book-monster X
12.Forgotten voices of WWI, by Max Arthur, begun by Longfordmaine X
13.By the light of my father's smile,by Alice Walker, begun by hotflash X
14.Art of travel, begun by pennywhistler X
15.Curious incident of the dog in the nighttime, begun by morpha X
16.The Queen of the tambourine,by Jane Gardam, from bookmonster X
17.Light on snow, by Anita Shreve, begun by flaming-ice X
18.The Corrections, by Franzen, from bookscout X
19.A Long way down, by Nick Hornby, from eMeReS X
20.No place for a lady, by Barbara Hodgson, B'day RABCK from eicuthbertsonX
21.The Tattooed map, by Barbara Hodgson, B'day RABCK from eicuthbertson X
22.What we keep, by Elizabeth Berg, RABCK from hotflash X
23.Death of a gossip, Hamish Macbeth book, from Ulrika X
24.Travels with my elephant, by Mark Shand, from dododumpling
25.Fingersmith, from swan-scot...oops, got away!
26.A Short History of tractors in Ukrainian, by M.Lewycka, from Netstation
27.A Child in the Forest, by Winifred Foley, from girlpenguin X
28.Losing Nelson, by Barry Unsworth, from StephenJH X
29.Three Women of Liverpool, by Helen Forrester, from BreakEveryRule X
30.Sky Burial, by Xinran, from catsalive X
31.The Walker, by Jane R. Goodall, from Leeny37 X
32.Quidditch through the ages and Fantastic Beasts and where to find them, from MooMoo1977 X
33.The Pull of the moon, by E. Berg from jessibud X
34.Alias Grace, by Margaret Atwood, from nut X
35.A Question of Upbringing, by Anthony Powell, from Dunzy X
36.Barometer rising, by Hugh MacLennan, from Ibis3 (CanLit) X
37.Enid Blyton Bookbag, begun by eris-in-oz X
38.Student Chronicles by Alice Garner, from astro2480 X
39.Never let me go, by Kazuo Ishiguro, fromlmn60X
40.We need to talk about Kevin, by Lionel Shriver, from CanberraPenny X
41. The Blue Mountains of China, by Rudy Wiebe from Ibis3 (CanLit)
42.In the country of men, by Hisham Matar, from miss-jo (Booker Short List)
43.Running with scissors, by Augusten Burroughs, from Genevalove X
44.The Inheritance of loss, by Kiran Desai, from Fleebo(Booker Prize short list- winner 2006)
45. The Night Watch, by Sarah Waters, from woosang
(Booker short list)X
46.Fingersmith, by Sarah Waters, from goodthinkingmax X
47. The Children's War by Monique Charlesworth, from Jelicle X
48.Carry me down, by M.J. Hyland (Booker 2007 short list)from jubby X
49. Short story bag, from DrCris X
50. Persepolis, graphic novel by Marjane Satrapi, from miketrollstigen (unforgiven)X
51.Fifth Business (Deptford series), by Robertson Davis, from Ibis3 (Canlit ring) X
52.Hero, graphic novel by Wing Shing Ma, from azuki X
53.Arcadian adventures with the Idle Rich, by Stephen Leacock, from Ibis3 (Canlit ring)X
54. Man and boy, by Tony Parsons, from frangipanni08X
55. Bios and memoirs bookbag, from melanie2474X
56. Island (short stories), No Great mischief and CD, by Alistair MacLeod (CanLit) from Ibis3 X
57.The Book Thief, by Marcus Zusak, from livrecache X
58.Bones and silence, by Reginald Hill, from Dunzy X
59.The Rice mother by Rani Manicka, from felicia-fairy/Bulan Purnama X
60.The Murray Whelan trilogy, by Shane Maloney, from lmn60 X
33 finally came in! Pull of the moon by E.Berg from jessibud and lakelady X
61.Kalimantaan by Godshalk, from foxed X
62.Running for the hills, by Horatio Clare, from musicalpenguin X
63.The Piano shop on the left bank, by T.E.Carhart, from bestfriends
64.A Little death, by Laura Wilson, from pinkozcat X
65.English Passengers, by Matthew Kneale, from pinkozcat
70.Black Swan Green, by David Mitchell, from ajsmum X
71.Balzac and the little Chinese seamstress, by Dai Sijie, from isabel-batteriaX
72.Last days at Chez Nous, by Helen Garner, from lmn60X
73.The Vanishing act of Esme Lennox, by Maggie O'Farrell, from lakelady2282X
74.War Horse, by Michael Morpugo, from miketrollstigenX
75.Short stories by Michael McLaverty, from foxedX
76.Affinity, by Sarah Waters from LadyIndigoX
77.Innocence, by Penelope Fitzgerald, from LadyIndigo
78.Here on earth by Alice Hoffman, from marciNYC via LadyIndigo
79.The Piano Tuner by Daniel Mason from LadyIndigo X
80.Tales of a female nomad, by Rita Golden Gelman, from LillyMagoo and Hotflash X
81.Kitchen confidential, by Anthony Bourdain, from TQD X
82.Tomaree, by Debbie Robson, from lakelady X
83.Interpreter of maladies, by Jhumpa Lahiri, fromSqueakyChu X
84.The Girl who played Go, by Shan Sa, from Dunzy X
Oops, a gap...busy Christmas
Snow by Orhan Pamuk X
The Secret Scripture by Sebastian Barry X
The White Tiger by Aravind Adiga from Livrecache X
Strange Meeting by Susan Hill from BookCrosser and penelopewanders X
Man in the Dark by Paul Auster from lakeladyX
Play Parade by Noel Coward from Extreme-ReaderX
Three Dollars by Elliot Perlman
The Enchantress of Florence by Salman Rushdie from Freepages
Sea of Poppies by Amritav Ghosh from star-lightX
Whistling for Elephants by Sandi Toksvig
The Ship of Brides by Jojo Moyes from house elfdobbyX
My Name is Will by Jess Winfield from Min-Owl
The Northern Clemency by Philip Henschler X
A Fraction of the Whole by Steve Tolz from jubby
The Little Stranger by Sarah Waters fromgoodthinkingmax X
The Case of the Exploding MangoesX
The Quickening Maze, by Adam Fould from star-light
Jane Austen; the world of her novels, by D.Le Faye from chich X
Fair Play by Tove Jansson, from hakkalina X