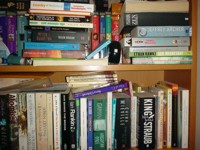 Dawn of the Dumb: Dispatches from the Idiotic Frontline

The Girl of His Dreams

The Boy in the Striped Pyjamas

The End of Mr Y

The Children of Men

The Seven Days of Peter Crumb

Currently reading:
The Making of Modern Britain by Andrew Marr

Current book[rings|rays]:
A College of Magics by Caroline Stevermer run by SheWhoReads
Balthasar's Odyssey by Amin Maalouf run by Fellraven
Bill Bryson's African Diary by Bill Bryson run by Catwoman
Da Vinci Code, the by Dan Brown run by fannynatalie
Die for Love by Elizabeth Peters run by shaunesay
Ella Minnow Pea by Mark Dunn run by me — PM me to join!
Favourite Book Journal by various BookCrossers
French Revolutions by Tim Moore run by me — PM me to join!
Middlesex by Jeffrey Eugenides run by citrus
Muddle Earth by Paul Stewart & Chris Riddell run by lady-anglophile
Toast by Nigel Slater run by redhouse
When the Phone Rang by various BookCrossers run by Maurean
Wind Up Bird Chronicle, the by Haruki Murakami run by me — PM me to join!
The Winshaw Legacy by Jonathan Coe run by mdhistorian
[Crossed-out rings|rays are still going on — and are possibly still joinable — but have moved beyond the orbit of SkyRider Towers.]

Whenever I visit someone's house, I always look over their bookshelves to gague the sort of people they are. I'm now really hoping that nobody does this to me, since the these are the books that I reckoned I wouldn't be likely to want to read again. In some ways, I suppose they're almost an antithesis of me.

But it's not quite that simple. There are lots of books — light adventure stories, whodunnits, fantasies — that can be great to read but are genuinely "single use".

So don't try to look at me. Look at the books instead...!

I've given in to peer pressure and set up a wish list. Given that my "to read" pile is already immense though, the wish list isn't large....


Through the Alphabet in a Year

Well, I've seen this happening on so many other people's profiles that I thought I'd give it a shot myself. I normally read 40ish books a year, so this'll direct a substantial part of my annual reading. Anyway, books read so far in 2005 include (but aren't limited to):

"Properly, we should read for power. Man reading should be man intensely alive. The book should be a ball of light in one's hand."