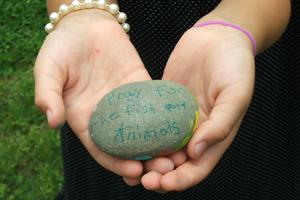 The Nanny Diaries: A Novel

Eat, Pray, Love: One Woman's Search for Everything Across Italy, India and Indonesia

Love in the Time of Cholera (Oprah's Book Club)

The Murder Room: The Heirs of Sherlock Holmes Gather to Solve the World's Most Perplexing Cold Cases

ARE YOU THERE VODKA? IT'S ME, CHELSEA

Mom. 2 children. 1 of each. Very ordinary life, but ordinary is good. Married to a career Naval Officer. We split our time between Pensacola, FL and Millington, TN. I prefer the beauty and quiet of the Gulf Coast, although Millington/Memphis has excellent BBQ! Home, of course, is wherever the Navy takes us.

My ordinary life setting is BEAUTIFUL Pensacola, FL. My profile picture is the back of a Fish Rock Prayer Token my 7 year old made to honor the creatures of the Gulf that were destroyed because of the Deepwater Horizon oil catastrophe. As of this date, August 2011, are beaches are clean, the tourists have returned, and our fisherman are back on the water. However, the long term impact from the amount of oil released and the chemicals used to disburse it, remain to be determined.

Here are some interesting facts about my area of world taken directly from our Chamber of Commerce:
-City of Five Flags. Since 1559, Pensacola has been ruled by Spain, France, England, the Confederacy and the United States, bringing cultural diversity to our architecture, cuisine and celebrations.
-Cradle of Naval Aviation — All Navy, Marine and Coast Guard aviators start their training in Pensacola.
-We’re also home to the world-famous Blue Angels and one of the world’s largest aviation museums, the National Naval Aviation Museum.
-Best Beaches. Our beaches have been ranked among the best in the country by TripAdvisor, Dr. Beach and the Travel Channel. Our Gulf Islands National Seashore is the longest tract of protected seashore in the country.
-Western Gate to the Sunshine State. Pensacola's location in the western corner of Florida means we’re the first city to welcome our neighbors from the west.
-USS Oriskany. This retired aircraft carrier was sunk off our shores to become the world’s largest artificial reef and a hot spot for scuba diving.
-Pensacola Beach Fishing Pier. At 1,471 feet, it is the longest pier in the Gulf of Mexico.

South of Broad
Flushed
Between the Tides*
The Nanny Diaries*
An Ocean Between Us*
Body Surfing: A Novel*
Smokin' Seventeen
Sizzling Sixteen
Where the Heart Is*
Keeper
Scat
Hoot
The Appeal
The Associate


If you receive one of my books, you may keep it forever and ever, pass it on to a friend, or, in the true spirit of bookcrossing, release it into the wild. My only request is that you journal - just a quick note - when you receive it or pick it up so I know that it's safe in your hands.

Want to trade?
I'm registered on RABCK.com. I'll gladly trade for the books on my wishlist, which is kept reasonably current.

"He felt about books as doctors feel about medicines, or managers about plays -- cynical but hopeful."