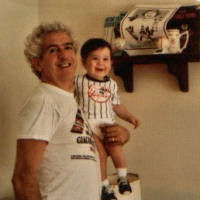 The Couple Next Door

The Lower East Side Remembered and Revisited

The Way of the Runner: A Journey into the Fabled World of Japanese Running

PUSH - A Guide to Living an All Out Life: The Story of Orangetheory Fitness

Eat and Run: My Unlikely Journey to Ultramarathon Greatness

The Art of Asking: How I Learned to Stop Worrying and Let People Help

The Ethnic Food Lover's Companion: A Sourcebook for Understanding the Cuisines of the World

On Top of the World: Cantor Fitzgerald, Howard Lutnick, & 9/11: A Story of Loss & Renewal

2830 32 30 something year old American, reader, writer, traveller. Not as active here as I used to be, but still reading. I don't maintain my bookshelf except for recent transactions. Apologies for getting your hopes up if you find something AVL.

Most of the info below is out of date as of November 2012 and some of the links are broken, but I'm leaving it

Reads/Releases:
I stopped tracking these in the States because I didn't BC often and didn't remember to update the pages. This summer in Prague I've started releasing again and have started tracking them again:

- Wild Released: 2007 - not too many and far more are int'l but they're fun to track.
- alphabetical List of true wild releases and catches in Australia, January - November 2005. The 'catches' need to be updated since more have been caught. Updated: pretty happy with the 10.5% catch rate nearly two years later.
- I didn't wild release much in Japan due to the language barrier but I often left books where other teachers could find them. A fair few of them have been caught by other teachers.

Been a reader (and sports fan!) from an early age and will read almost anything. I don't really have a favourite genre, though I tend to read a lot of non-fiction especially travelogues, history and language related books. As far as fiction, I tend to enjoy crime/thrillers with a dose of chick lit thrown in for good measure. It's not a guilty pleasure because I don't feel the least bit guilty reading a good book :)

I do enjoy the fun of wild releasing, but I'm open to rings, rays, trades, RABCKs, whatever and am somewhat active on BookRelay and BookMooch. Will rarely say no unless I have plans for the book or if it's just too big to post so feel free to ask.

If you're the ringing sort...

Bookrings/rays I have organised (PM me to join):

Australia Only
Notes from a Small Island by Bill Bryson - this book will be released among English speakers in Vietnam
No Shitting in the Toilet by Peter Moore - Lost in AusPost 13 Feb 2006 but replaced by Sabavana! Lost in the post x2? :(
One for the Road by Tony Horwitz: Finished its run. Yay!

International
So Many Books, So Little Time by Sara Nelson
Ticket to Ride by Sarah Darmody
Bells of Nagasaki by Takashi Nagai
Learning to Bow - by Bruce Feiler - Copy 1 (in a black hole) Copy 2 (US/Canada: Open) and Copy 3 (Int'l: Closed)
Annie Freeman's Fabulous Traveling Funeral by Kris Radish Completed its initial ring and began a second under someone else.
Freakonomics by Steven D. Levitt & Stephen J. Dubner stalled and replaced by LyzzyBee's copy of the book.
Hokkaido Highway Blues by Will Ferguson My first ring to come home. Yay!
The Accidental Office Lady by Laura Kriska
Cafe Europa by Slavenka Drakulic
Absolutely Faking It by Tiana Templeman
The Blue-Eyed Salaryman by Niall Murtagh
One Red Paperclip by Kyle MacDonald