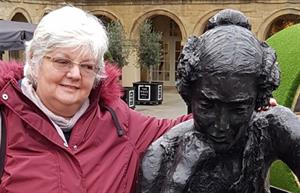 Y is for Yesterday

The Art and Design of Charles Rennie Mackintosh (Postcards)

The Sack of Bath (Persephone)

This Thing of Darkness

Now You See Them

The Cup of Ghosts (Mathilde of Westminster Trilogy, Book 1)

The Rag and Bone Shop

Fall on Your Knees

Knight of a Trillion Stars

Places in the Darkness


I'm Rita & live in Beeston in Nottingham. Married with one son.
If you receive books from me in trade or rabck, I have no problems with you keeping them in your PC (personal collection).;

I've set up a shelf for the OBCZ in Beeston: The Bean OBCZ