A Tale of Two Cities

The Grapes of Wrath

Gone With the Wind

There He Keeps Them Very Well

The Last Battle (The Chronicles of Narnia, Book 7)

Midnight in the Garden of Good and Evil

Voyage of the Dawn Treader

The Chronicles of Narnia: Prince Caspian

The Sorrows : A Grand Retelling of 'The Three Sorrows' (Ulster Cycle)

The Grapes of Wrath


The Big Read
I've decided to challenge myself by reading the books on the BBC's top 100 list, The Big Read. So far, I've read (82/100):
1. The Lord of the Rings by JRR Tolkien
2. Pride and Prejudice by Jane Austen
3. His Dark Materials by Philip Pullman
4. The Hitchhiker's Guide to the Galaxy by Douglas Adams
5. Harry Potter and the Goblet of Fire by JK Rowling
6. To Kill a Mockingbird by Harper Lee
7. Winnie the Pooh by AA Milne
8. 1984 by George Orwell
9. The Lion, the Witch, and the Wardrobe by CS Lewis
10. Jane Eyre by Charlotte Bronte
11. Catch-22 by Joseph Heller
12. Wuthering Heights by Emily Bronte
13. Birdsong by Sebastian Faulks
14. Rebecca by Daphne du Maurier
15. The Catcher in the Rye by JD Salinger
16. The Wind in the Willows by Kenneth Grahame
17. Great Expectations by Charles Dickens
18. Little Women by Louisa May Alcott
21. Gone with the Wind by Margaret Mitchell
22. Harry Potter and the Philosopher's Stone by JK Rowling
23. Harry Potter and the Chamber of Secrets by JK Rowling
24. Harry Potter and the Prisoner of Azkaban by JK Rowling
25. The Hobbit by JRR Tolkien
26. Tess of the D'Urbervilles by Thomas Hardy
28. A Prayer for Owen Meany by John Irving
29. The Grapes of Wrath by John Steinbeck
30. Alice's Adventures in Wonderland by Lewis Carroll
31. The Story of Tracy Beaker by Jacqueline Wilson
32. One Hundred Years of Solitude by Gabriel Garcia Marquez
33. The Pillars of the Earth by Ken Follett
35. Charlie and the Chocolate Factory by Roald Dahl
36. Treasure Island by Robert Louis Stevenson
37. A Town Like Alice by Nevil Shute
38. Persuasion by Jane Austen
39. Dune by Frank Herbert
40. Emma by Jane Austen
41. Anne of Green Gables by LM Montgomery
43. The Great Gatsby by F Scott Fitzgerald
45. Brideshead Revisited by Evelyn Waugh
46. Animal Farm by George Orwell
47. A Christmas Carol by Charles Dickens
49. Goodnight Mister Tom by Michelle Magorian
51. The Secret Garden by Frances Hodgson Burnett
52. Of Mice and Men by John Steinbeck
53. The Stand by Stephen King
54. Anna Karenina by Leo Tolstoy
56. The BFG by Roald Dahl
57. Swallows and Amazons by Arthur Ransome
58. Black Beauty by Anna Sewell
59. Artemis Fowl by Eoin Colfer
61. Noughts and Crosses by Malorie Blackman
62. Memoirs of a Geisha by Arthur Golden
63. A Tale of Two Cities by Charles Dickens
65. Mort by Terry Pratchett
66. The Magic Faraway Tree by Enid Blyton
68. Good Omens by Neil Gaiman and Terry Pratchett
69. Guards! Guards! by Terry Pratchett
70. Lord of the Flies by William Golding
71. Perfume by Patrick Suskind
73. Night Watch by Terry Pratchett
74. Matilda by Roald Dahl
75. Bridget Jones's Diary by Helen Fielding
76. The Secret History by Donna Tartt
77. The Woman in White by Wilkie Collins
79. Bleak House by Charles Dickens
80. Double Act by Jacqueline Wilson
81. The Twits by Roald Dahl
82. I Capture the Castle by Dodie Smith
83. Holes by Louis Sachar
85. The God of Small Things by Arundhati Roy
86. Vicky Angel by Jacqueline Wilson
87. Brave New World by Aldous Huxley
88. Cold Comfort Farm by Stella Gibbons
89. Magician by Raymond E. Feist
90. On the Road by Jack Kerouac
92. The Clan of the Cave Bear by Jean M Auel
93. The Colour of Magic by Terry Pratchett
94. The Alchemist by Paulo Coelho
96. Kane and Abel by Jeffrey Archer
97. Love in the Time of Cholera by Gabriel Garcia Marquez
98. Girls in Love by Jacqueline Wilson
99. The Princess Diaries by Meg Cabot

images.quizilla.com/---/1061049935_1824191.gif" border="0" alt="JaneEyre">
'Tis a great mystery, but somehow you have come to
belong in Jane Eyre; a random world of love,
kindness, madness, bad luck and lunatic
ex-wives. There really isn't much to say about
the place you belong in. It's your place, and
though it seems far from reality largly due to
how random the events are, you seem to enjoy
it. You belong in a world where not too many
people understand you, and where you can be
somewhat of a recluse.


Which Classic Novel do You Belong In?
brought to you by Quizilla 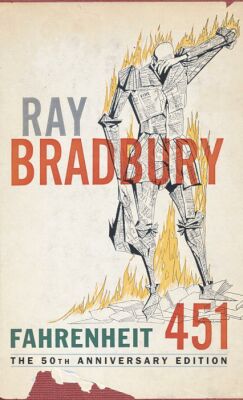 Having wanted to be a firefighter much of your life, you've recently
discovered the job wasn't exactly what you were looking for. While ignorance seems like
the result of oppression, it all began with people just wanting to be ignorant. As you
realize more about the sordid world around you, you decide to watch less TV and work on
your memorization skills. Though your memory will save you in the end, don't forget to
practice running from dogs as well.

"A book must be the ax for the frozen sea within us."