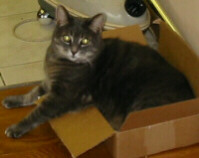 The Bodies Left Behind: A Novel

Can't Wait to Get to Heaven: A Novel

Secrets She Left Behind

Married with 3 children. I am an avid reader. Enjoy various types of books but prefer Dean Koontz, Stephen King, Thomas O'Callaghan, Jonathan Kellerman, John Sandford, James Patterson, Rick Mofina and a few others. One of my favorites was To Kill A Mockingbird.

Get hugs of your own

"No two persons ever read the same book."