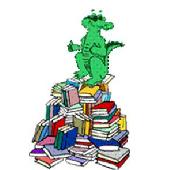 Two Tickets to the Christmas Ball

City on Our Knees

Fires in the Mind

A Million Miles in a Thousand Years: How I Learned to Live a Better Story

You Can't Make Me (But I Can Be Persuaded): Strategies for Bringing Out the Best in Your Strong-Willed Child

Does the Noise in My Head Bother You?: A Rock 'n' Roll Memoir

Radical: Taking Back Your Faith from the American Dream

Arguing with Idiots: How to Stop Small Minds and Big Government

Alaska: Tales of Adventure from the Last Frontier

Iron Man: My Journey through Heaven and Hell with Black Sabbath

Help! I'm Turning Into My Mother

Crazy Stories, Sane God: Lessons from the Most Unexpected Places in the Bible

I'm a teacher in west central Florida and like most educators, I love to read. Right now I only manage to get through about twenty books a year, as I'm also a busy wife and mother. Next to the nearest sandy beach, my favorite place to be is in a bookstore or library.

Bookrays/bookrings in which I'm participating

The Guernsey Literary and Potato Peel Pie Society (offered by grubsneerg)
Read & sent on to next reader, 1 Mar 2010

The Memory Keeper's Daughter by Kim Edwards (offered by franaloe)
Read & sent on to next reader, 17 Aug 09

The Piano by Jane Campion & Kate Pullinger (offered by waderwoman)
Read & sent on to next reader, 25 Jul 09

"Books to the ceiling
Books to the sky.
My piles of books
Are a mile high.
How I love them!
How I need them!
I'll have a long beard
By the time I read them."