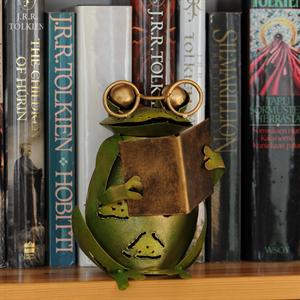 Dinner at the Homesick Restaurant

The Rest of Us Just Live Here

Aristotle and Dante Discover the Secrets of the Universe

The Silent Sister: A Novel

The Stars Are Falling

The Tattooist of Auschwitz

I read in English and Finnish. If you have a book in easy/simple German, Swedish or Norwegian, I could give it a try. And if you happen to have a children's book with/about frogs in ANY language, I'd love to receive it! But beware: I probably want to leave it as PC if I don't have it yet. I also like frogs & toads in postcards and other stuff. I drink lots and lots of black spiced tea (not rooibos), and enjoy chocolate every now and then. Short no-no: I'm sensitive to smells, so please don't send me anything perfumed or scented. Thanks.

I like to read series in right order which is why there is usually just one volume (the one I'd like to read next, so I don't forget which one) on my wishlist . But if you have later volumes of the same series, I'd be happy to get those too. Eventually I'll get to read them. :) Toivelistallani on useimmat kirjat englanniksi, mutta suomennoksetkin kyllä kelpaavat, jollei toisin mainita. :)

Books registered by me have traveled to:

"The man who does not read good books has no advantage over the man who cannot read them."