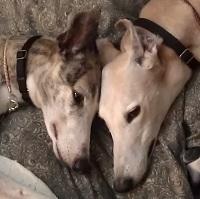 Where the Heart Is

The Big House : A Century in the Life of an American Summer Home

Among the Hidden (Shadow Children #1)

The Voyage of the "Dawn Treader"

Silver Hornet (born 19 May 2005) was an excellent racer for a couple of years, until her retirement from racing in January 2009. She was picked up south of Atlanta as a stray in August 2011. She came home with me as a foster dog--and she stayed.

Her newest housemate is a greyhound called Tigger (born 5 April 2007). He raced as Flying Clemenza, and he was very good at it. He retired in 2011 and was adopted in May 2012. But his mom's job changed so that she had to travel a lot and she sent him back to SEGA to find him a new home. I brought him home in November 2013 as a foster, and I signed adoption papers on him 23 January 2014. He's Tigger because he's orange with black stripes--and because he bounces. Constantly.

Sam was born 10 May 2000; he came to me in October 2002. Sam (formerly known as Stat K Sam) never raced. He had a dangerous tendency to sightsee while he’s running, and has been known to hit trees, fences, and walls—sometimes hard enough to injure himself—because he wouldn’t watch where he was going. My darling Sam died 8 August 2013.

Jacey-Kacey was born 19 May 2003; she came to me 8 April 2006. Jacey (formerly Pinerun Torri) raced at the Jefferson County Kennel Club (J.C.K.C.) in Florida. She ran reasonably well in her first season in 2005, but her first outing of the 2006 season was a disappointing 7th place, so she has galloped into early retirement here in Georgia. She became ill with immune mediated thrombocytopenia, and after four days at the emergency vet's, I had to let her go on 22 August 2011.

My darling Oreo was born 20 November 1997; she came to me in November 2001, after a period in another home. She lived with me for more than four years. But on 29 March 2006, she broke her leg in a freak accident. Then, while she was undergoing orthopedic surgery on 30 March, a blood clot broke loose and traveled to her lungs, and she died at the age of 8 years, 4 months, and 10 days. She was such a wonderful dog, and I long ago told her she had earned a home for another racer. On 8 April 2006, I kept my promise to Oreo and brought Jacey home, where the new girl has settled into her role as the bane of Sam’s existence. Oreo would approve.

The early deaths of Oreo and Jacey is certainly not the norm: greyhounds typically live to be 12 to 14 years of age. If not for rescue groups, these wonderful dogs would have been destroyed at the age of two. PLEASE support rescue groups and neuter/spay programs ... and make your next pet an adopted one.