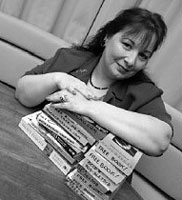 Russia and the West under Lenin and Stalin

The Midas Touch : Why the Rich Nations Get Richer and the Poor Stay Poor

Origins of the American Revolution

The People's Republic of China: A Documentary History of Revolutionary Change

Techno-Bandits - How the Soviets are Stealing America's High Tech Future

In January of 2006, I was featured in a wonderful little article on BookCrossing that was in one of the local small newspapers called the Montreal Mirror. If you'd like to read it; here is a link to an archived version of that article:
Literary Litterbugs article in Montreal Mirror

I did a radio interview about BookCrossing on CBC's "HomeRun" show on Tuesday, January 31st, 2006. If you'd like to listen to it in their archives, here is the link to find out how to do so:
CBC's HomeRun Show

I used to be the Organizer of the local Montreal BookCrossing Meetups many years ago. Only recently have gotten back into it, since a small "wild library" popped up not far from me and gave me some inspiration to start releasing books again.

I discovered BookCrossing in the summer of 2003, when doing some research on "treasure hunting sports", not long after I began the sport of GeoCaching. I only got around to registering on BookCrossing until February of 2004. I find the concept refreshing, as I am into the concepts of Feng Shui and reducing clutter in one's life. It seemed so appropriate as I have been wanting to reduce some of my unwanted or unneeded items in my life in order to simplify things; however, having been raised as a book lover - I could *never* just throw a book away as that would seem like a form of sacrilege.

The idea of "releasing" a book into the world, for it to find it's way to other readers, and possibly to be tracked through it's journals seemed not only like fun, but had a measure of karma involved. It just seemed *right* to me -- a way that would allow me to "let go" of books that were otherwise taking up room on a bookshelf and hadn't been read in years, if at all.

A week after I joined BookCrossing, I launched Montreal's first and only "Official BookCrossing Zone" or OBCZ, at Café Perk Avenue, which has unfortunately gone out of business.

I enjoy books on gardening (indoor & out), Feng Shui, SciFi & Fantasy, especially about Dragons, and anything with Star Trek Klingons in it. I used to be a big Stephen King fan and still like a good mystery or thriller and horror books. I have my own little permanent library of New Age-related books about Chinese Horoscopes, Tarot cards and Runes and how to do readings.