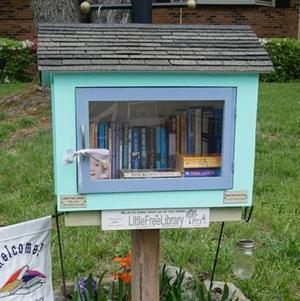 Under the Sunday Tree

Lord of the Flies

A Wrinkle in Time

Fantastic Beasts and Where to Find Them: The Original Screenplay

The House on Mango Street

Jackie and Jesse and Joni and Jae

I Am a Princess (Star Wars)

Erin's Legacy Little Free Library (#29843) was originally created in 2015 by Erin's mother, who was inspired to create this LFL by her daughter. On September 6, 2016, Erin was was killed in a car accident as she returned to college after supporting protesters at Standing Rock in North Dakota. She was 21, and a senior at Seattle Pacific University.

Erin's parents have now moved out of the area, but wanted the Little Free Library to remain in the community. It has new stewards and has moved around the corner, where it continues to provide books for those in the community.

"Second hand books are wild books, homeless books; they have come together in vast flocks of variegated feather, and have a charm which the domesticated volumes of the library lack."