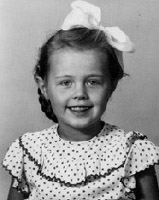 The Case of the Daring Divorcee

What the Light Hides

A Case of Need

Not After Midnight and Other Stories

The Carousel and Voices in Summer

I brought a book back from USA to Australia in June 2004 and got a few people started into BookCrossing. Now I have finally joined instead of staying as Anonymous Finder. So, eris-in-oz and djt, YOU CAN STOP NAGGING!
I looked for the best photo of me and found this one, taken when I was at my prettiest at age 5 or 6.

In these 50 years I have read only 1,578 books, not counting texts, short stories from magazines, Schoolgirls' Own Libraries, etc. The most read in one calendar year was 130 in 1974, mostly from the local library. The poorest year was 1970 with only 6 books, but I did have a new house and 2 very small children.

"I cannot live without books," once said Thomas Jefferson.

I have always prided myself in finishing any book I start no matter how uninteresting it may get. However, there is one exception: About 40 years ago I was trying to read Bunyon's "A Pilgrim's Progress" and got only just halfway - it was the most boring book imaginable. In the last 10 years I have wallowed in secondhand books as well as my usual new ones, and have read quite a few unusual books, some more interesting than others. Now I find I have more books at home than I can read, so am releasing ones I think I will pass, but a few at a time. So some of my TBR books may become AVL if anyone wants them.