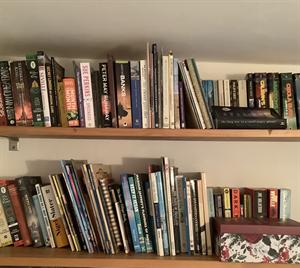 Arm of the Sphinx

The Man in the High Castle

We Were Soldiers Once...and Young: Ia Drang - The Battle That Changed the War in Vietnam

Recently restarted on BookCrossing so this is well out of date!

I don't do too much wild releasing - I have visions of lovely books ending up in rubbish bins! So I prefer to swap books, then I know they're going to a good home ;o)

Dreamcatcher by Stephen King
Pompeii by Robert Harris
We Were Soldiers Once...and Young by Harold G. Moore
The Time Traveler's Wife by Audrey Niffenegger (one of my favourite books EVER)
Bag Of Bones by Stephen King
Archangel by Gerald Seymour
Black Hawk Down by Mark Bowden
The Children of Men by P.D. James (interrupted - nabbed by the missus, back on the TBR)
Blindsighted by Karin Slaughter
The World Jones Made by Philip K. Dick
Just One Look by Harlan Coben
The Lovely Bones by Alice Sebold
The Unknown Soldier by Gerald Seymour
Storm Front (Dresden Files) by Jim Butcher
The Traveller by John Twelve Hawks
Fatherland by Robert Harris
Stranger in a Strange Land by Robert A. Heinlein
The Gunslinger by Stephen King
Tell No One by Harlan Coben
Fool Moon (Dresden Files) by Jim Butcher
The Integral Trees by Larry Niven (again)
Paddy Clarke Ha Ha Ha by Roddy Doyle (got a bit bogged down with this one)
Holding The Zero by Gerald Seymour
The Black Tattoo by Sam Enthoven
Yes Man by Danny Wallace
Birdman by Mo Hayder
Grave Peril by Jim Butcher
Flowers for Algernon by Daniel Keyes
The Drawing of the Three by Stephen King
Seed of Light by Edmund Cooper
Earthlight by Arthur C. Clarke (again)
Ender's Game by Orson Scott Card
I, Lucifer by Glen Duncan
Slaves of Heaven by Edmund Cooper
Starship Troopers by Robert A. Heinlein
Summer Knight (Dresden Files) by Jim Butcher
Lisey's Story by Stephen King
Relentless by Simon Kernick
The Waste Lands by Stephen King
A Foreign Field by Ben Macintyre
The Smoke Ring by Larry Niven
Wizard and Glass by Stephen King
The Dark River by John Twelve Hawks
Perdido Street Station by China Mieville
Shade's Children by Garth Nix
Field Of Blood by Gerald Seymour
The Righteous Men by Sam Bourne
Do Androids Dream of Electric Sheep by Philip K. Dick (again)
Death Masks by Jim Butcher
A Thread of Grace by Mary Doria Russell
A Song of Stone by Iain Banks
Shadow of the Wind by Carlos Ruiz Zafon
Life of Pi by Yann Martel (best book since The Time Traveler's Wife)
I Am Legend by Richard Matheson
Moby Dick by Herman Melville (again)
The Eagle Has Landed by Jack Higgins
The Kite Runner by Khaled Hosseini
...
Glory Boys by Gerald Seymour
Iron Council by China Mieville
Matter by Iain M. Banks
Ghost Story by Peter Straub

"The greatest part of a writer's time is spent in reading, in order to write; a man will turn over half a library to make one book."