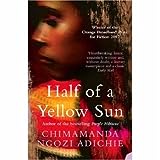 Half of a Yellow Sun

Welcome to BookCrossing and thanks for being a part of World Book Night 2011, the largest book giveaway in history. 1,000,000 specially printed copies of 25 different books changed hands on March 5th 2011 and began their journey from reader to reader. This book is one of them. World Book Night has joined with BookCrossing to help track these books as they travel. You can be a part of that journey by making a comment in the book's journal here on BookCrossing. Your journal entry can say how you got the book, what you thought of it, your plans for it or whatever else you might like to add.

On BookCrossing you may choose to remain anonymous or join (it's free). If you join, you’ll be alerted by e-mail each time someone makes another journal entry for this specific copy of this book (other copies of the book are travelling with their own ID number. Every copy of every book has a unique ID). It’s all confidential (you’re known only by your screen name and no one is ever given your e-mail address) and spam-free.

Thanks in advance for being part of World Book Night and BookCrossing. And happy reading and sharing.

This book is being released via BookCrossing on 5 March 2011 as part of the inaugural World Book Night. With the full support of the Publishers Association, the Booksellers Association, the Independent Publishers Guild, the Reading Agency with libraries, World Book Day and the BBC, one million books will be given away by an army of passionate readers to members of the public across the UK and Ireland.

Journal Entry 3 by caradon at St Helens, Merseyside United Kingdom on Friday, March 11, 2011
Delighted to be giving Half of a Yellow Sun away as part of the 2011 World Book Night celebrations. A book I loved and I look forward to seeing how far they all fly.

Given out at baby signing class Tiny Talk, Warrington

"What really knocks me out is a book that, when you're all done reading it, you wish the author that wrote it was a terrific friend of yours and you could call him up on the phone whenever you felt like it."