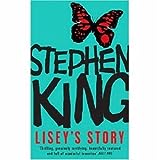 by Stephen King | Horror |
ISBN: 9780340898956 Global Overview for this book
Registered by arturogrande of Coalville, Leicestershire United Kingdom on 8/8/2009

Journal Entry 1 by arturogrande from Coalville, Leicestershire United Kingdom on Saturday, August 8, 2009
I've categorised this as a 'horror' book - simply because it's by Stephen King, who broadly writes in the horror genre. But that is to do it - and King - a disservice.
King is not just a good writer, he is a great writer, and if he had made his name in any other genre than horror, then that would be an acknowledged fact.
He paints the most amazing pictures with words and uses the English language in such a beautiful way that every scenario - including the parallel world in Lisey's Story, are completely believable.
He also has a fine ear for dialogue and writes conversations the way people REALLY talk to each other in life, rather than the artificial speeches may characters in novels deliver to each other.
Lisey's Story is a very moving book and yet again, King has shown that he writes female characters very well. The central relationship in the book - between Lisey and her writer husband Scott - feels very real.
Quite a few of the review snippets at the front of the book compare King's style to that of Charles Dickens - and they are spot on.
As a chronicler of human emotions and interactions, King is one of the best. Forget the 'horror' tag and just read this as the work of a great writer.