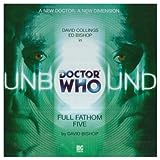 Journal Entry 1 by freelunch from Cairns, Queensland Australia on Tuesday, July 28, 2009
"If I told you the truth, I’d have to kill you..."

In 2066 the Doctor discovers the research centre remains intact. The terrible truth about what happened twenty-seven years ago will soon be revealed. The Doctor is determined to be the first to uncover and confront the secrets of the DEEP.

But unearthing the past can have terrible consequences for your future...

Journal Entry 2 by freelunch from Cairns, Queensland Australia on Monday, December 14, 2009
"something for the holidays" for a fellow Doctor Who fan...

this "what if?" scenario is one of my favourite Doctor Who stories.

Journal Entry 3 by RockDg9 from Toowoomba, Queensland Australia on Thursday, December 17, 2009
thanks so much freelunch!

Journal Entry 4 by RockDg9 from Toowoomba, Queensland Australia on Friday, December 25, 2009
I listened to this while driving up to Chinchilla for Christmas Day, after the radio stopped working. I should have taken another one for the return journey!

It was a way cool story. I loved the ending. Wow.

Journal Entry 6 by KateKintail at Burke, Virginia USA on Thursday, October 14, 2010
I pulled this out of my PO Box. I wondered what it was. I opened it as soon as I got back in my car. And I gasped out loud. Oh my gosh yes!!! A Doctor Who audio! SQUEEE! *does happy fangirl flail* I cannot wait to listen and then pass it on to another Doctor Who fan. Thank you so much! This made an otherwise busy and stressful week so much better.

Journal Entry 7 by KateKintail at Burke, Virginia USA on Sunday, October 31, 2010
That was... unexpected. I didn't realize until I'd looked this up after earreading it that this was an alternate "What if" Universe sort of thing. I kept wondering which Doctor (of the few I don't know--I'm watching the series from the beginning now) this was. And the companion wasn't familiar to me either, but I figured it must take place during a portion of the series I wasn't familiar with. After a while, I wasn't sure at all that it even fit into canon. This was never more true as when he used a gun. That definitely should have been a clue. And then the end came. OMG THE END! That was such a shock! I think I yelled "WHAT?!" at the CD player in my car at the top of my voice. It's amazing, but shocking.

Once I understood that this was an AU, it made a whole lot more sense :-) I like that the "What if" isn't stated outright. It could easily be "What if the Doctor believed the ends justified the means?" It could be "What if the Doctor made promises he couldn't keep?" But I prefer summing this audio drama up as "What if the Doctor lost his TARDIS?" That really explains it to me--the Doctor spending 27 years not traveling/running? The Doctor separated from his most constant companion? That's not the Doctor at all and I can see how that would do strange things to his mental capacities and his ethics.

There were certainly moments that were strange ("baaaaaaaby!"), but in general I really enjoyed both the performance and the story itself. As a "What if?" it's brilliant. It gave me a lot to think about and entertained me at the same time.


Sending back out for Holiday Gift-giving. Enjoy!

Journal Entry 8 by KonnieKing at Garber, Oklahoma USA on Saturday, November 06, 2010
To be listened to.