by Vikram Seth | Biographies & Memoirs |
ISBN: 0349117985 Global Overview for this book
Registered by

from Prenzlauer Berg, Berlin Germany on Saturday, July 11, 2009
"Seth is the author of the hugely popular novel A Suitable Boy (1993), and with the same attention to atmospheric detail and nuance of character he brought to that book, he now offers a deeply engaging dual biography of his great-uncle and great-aunt. At age 17, Seth journeyed from his native Calcutta to London to prepare for study at Oxford, and while in the British capital, he became acquainted with his two relatives--his uncle, an Indian like himself and a dentist, and his aunt, a German-born Jew--both of whom lived in London, though they had found their way there through much different paths. After writing A Suitable Boy, Seth decided to approach Two Lives not so much as a personal remembrance as a researched life history of the couple. So, as if one of their stories weren't rich enough, we get two--three, really, since the process of Seth's learning about his uncle's and aunt's lives and revivifying them as a dual narrative adds up to a third storyline. These two individuals, from widely divergent religious and cultural backgrounds, bring together on a larger plane two important national stories of the twentieth century: India during the years of division between and discord among Hindus and Muslims, and Germany under the anti-Semitic Nazi regime. As well as offering an insightful exploration of those broad themes, this beautiful book delivers a passionate answer to a more personal but timeless question of human relations: How do two people ever manage to end up together?" (from Booklist)


This book was part of the Contemporary Asian Literature VBB and is travelling to okyrhoe now.
Happy reading!

(adding a photo of the book's exceptional packaging)

Journal Entry 4 by okyrhoe at T-marbouta cafe (Hamra) in Beirut, All of Lebanon Lebanon on Tuesday, March 30, 2010

I will release this book on Tuesday March 30 2010 around 9pm, at the table near the entrance of T-marbouta in the Pavilion building, Hamra.

Journal Entry 5 by okyrhoe from Athens - Αθήνα, Attica Greece on Tuesday, March 30, 2010
(reserved for my comments) 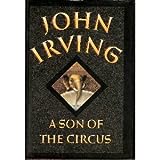