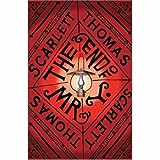 The End of Mr Y

Journal Entry 1 by rapturina from Rotterdam, Zuid-Holland Netherlands on Saturday, December 27, 2008
This book was chosen by my book club to read last month. It was an interesting book that I would've never picked up at a bookstore myself, so in that respect it shows how interesting it is to be in a bookclub and how you read books you'd never pick yourself. :D The story was pretty good, a fascinating idea, but some of it was just a bit too much. I didn't like the ending and some of the conversations were a bit unrealistic. Still, most of the philosophers & their ideas that the author talked about I had already learned about in Uni, so it was interesting to go back to these ideas. It did make it a lot easier to understand though, I think if you've never run into these particular philosophical concepts, it might be a bit trickier to get through the book!

Journal Entry 3 by Gnoe from Utrecht, Utrecht Netherlands on Wednesday, December 31, 2008
Thank you so much for this rabck Rapturina! I have heard very enthusiastic stories about it :) I'm looking forward to another great read in 2009 :))

I wish you lots of goods books for the new year as well!!!

Journal Entry 4 by Gnoe from Utrecht, Utrecht Netherlands on Thursday, September 03, 2009
I read The End of Mr. Y from January 9-15th while I had the flu and I am really, REALLY ashamed that it took me so long to write a journal entry/blog post. I considered releasing The End of Mr. Y as part of the (Bookcrossing) Utopian/Dystopian Sunday Sunset Release of February 1st (yes, that long ago), since the novel is definitely dystopian (about a society in which conditions of life are miserable). But because this book was a Random Act of Bookcrossing Kindness by rapturina, I figured I couldn’t just leave it somewhere out there in the cold, cold world.

In 2008 The End of Mr. Y was nominated for the Orange Prize for Fiction — one of the reasons why I wanted to read this novel. But which book addict would NOT put a page turner about a rare, mysterious -- and cursed -- publication on his or her wish list? I read The End of Mr. Y while recovering from the flu and quite loved it. At times it has a really feverish plot! I’m just not sure about the ending… Intellectually I would have liked it to end differently, but sick & sentimental me sort of felt good about it.

The book has been passed on to other readers. I am not afraid of bringing more people in danger because even though my health was weak, I still survived The End of Mr. Y (phew!). I guess the curse has diminished! Or has it?

Read more about my thoughts on Graasland!

Journal Entry 5 by fenna from Utrecht, Utrecht Netherlands on Tuesday, September 08, 2009
Gnoe delivered the book at my doorstep, so that I can pass it on to my friends *eSThER* (coming friday) and Gonda, who will surely leave a message here!