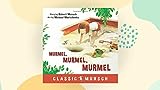 Journal Entry 1 by Pooker3 from Winnipeg, Manitoba Canada on Saturday, September 13, 2008
Canadian author.
Purchased from the Assiniboine Park Zoo's garage sale for release into the wild. :)

Journal Entry 2 by Pooker3 from Winnipeg, Manitoba Canada on Wednesday, September 24, 2008
I was introduced to Robert Munsch by way of his classic, *Love You Forever*. Actually it was my girl friend who is a child care worker and a bit of a wingnut when it comes to all things "kid" who read it to me. At the time I was an adult and my kids were nearly so. So it was not often that I read children's literature any more.

Anyway, she insisted on reading it to me despite my protests that I really wasn't interested in hearing it. Both of us ended up bawling our eyes out and I really thought it was one of the sweetest kids' books ever.

Then, some years later, I heard that some people were of the view that the book was "creepy", especially the relationship between the elderly mom and her grown son. I dismissed such criticism by reasoning that those people just didn't get it; that you had to view the book through a child's eyes and not an adult's.

Nevertheless, I've been affected by those critical comments and now seem to be on the lookout for "creepiness" in Munsch's books.

So, while I don't know if I would use the word "creepy" to define Murmel, Murmel, Murmel, my adult eyes do see it as odd. Robin, a little five year old girl, puts her arm down a hole in a sandbox and pulls out a baby. Knowing she can't look after it she sets out to find someone to take it. Apparently, she's willing to hand the babe over to just anyone, no questions asked. I just don't get it. However, reports from parents who have read this to their children tell me that kids love the story, they especially love the baby who can only say, "Murmel, murmel, murmel".

This is my fifth book by a male author for the 2nd Canadian Book Challenge, Eh?

Today is "Raise a Reader Day". So this book will be released in the wild today along with a few others. Hopefully they will find some readers who will share.

You'll find this book outside at the main entrance. It's leaning against my favourite "sign" in Winnipeg - "If you have a garden and a library you have everything you need."

Released for Raise a Reader Day. I hope this book finds a new reader soon!

at Winnipeg, Manitoba Canada on Thursday, May 3, 2012
Not sure where my sister found this book but it has become one of my nephews favourites. Every so often he'll run enthusiastically to the bookshelf and shout "memal memal memal!" That's my cue to scoop him up onto my lap and read him the story.

"Remember this too: all bad writers are in love with the epic."