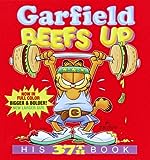 Garfield Beefs Up: His 37th Book

from Wellington City, Wellington Province New Zealand on Tuesday, June 24, 2008
Another fave of my sister's and mine! More Garfield cartoons IN COLOUR!!!! I'll either wild release this or send it to FutureCat for the anniversary of the first Christchurch meetup (and also FC's birthday!)

Sent on its way to FutureCat.

Journal Entry 3 by futurecat from Christchurch, Canterbury New Zealand on Wednesday, July 02, 2008
Arrived today, a couple of days too late for the cat meetup, but I'll find somewhere to release it.

Journal Entry 4 by futurecat from Christchurch, Canterbury New Zealand on Friday, July 04, 2008
Garfield was much improved for me by the discovery of this website. Makes you look at the cartoons in a whole new way...

(My favourite is this one.)

Given to waveweaver to release at the College of Education.

P.S. If you live in Christchurch, you might like to join us at our monthly bookcrossing meetups. For details, see the BCNZ Yahoo Group.

Did you know that in April 2009, the World Bookcrossing Convention will be held in Christchurch? Check out the convention website for more details.

Journal Entry 6 by Waveweaver from Christchurch, Canterbury New Zealand on Wednesday, July 23, 2008
Nya ha ha... I sense a cat theme here... Arrived in the internal mail for release on campus (after a bit of a read I think when I need a laugh in my day! :0)

"'When I'm done with the book,' she said, 'it is also done with me and moves on. I leave it on a bench in Columbus Park.'"