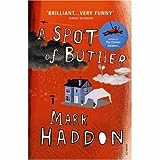 A Spot of Bother

Journal Entry 1 by gingergeoff from Swindon, Wiltshire United Kingdom on Saturday, March 01, 2008
I enjoyed Mark Haddon's first book, but I felt this one was a bit farcical. The ending was nice and everything was nicely rounded off, but I just felt it was all a little unbeleivable. I also found the way he has of telling the same situation through the 5 different main carachters a bit strange.

Journal Entry 2 by gingergeoff at A Fellow Bookcrosser in — Controlled Release, -- By post or by hand/ in person -- United Kingdom on Saturday, March 01, 2008

Journal Entry 3 by gingergeoff from Swindon, Wiltshire United Kingdom on Monday, April 28, 2008
This has been passed back to me by my sister-in-law. She did read it, but totally failed to journal it...Grrrr

Journal Entry 4 by gingergeoff from Swindon, Wiltshire United Kingdom on Monday, April 28, 2008
This is the second copy I have of this book, so I have split my ray in half.

This will be the order;

After that, it is up to you!

Journal Entry 5 by gingergeoff at A Fellow Bookcrosser in — Controlled Release, -- By post or by hand/ in person -- United Kingdom on Friday, May 02, 2008

Sent to Brujula on the start of a ray.

Journal Entry 6 by Brujula from Valenciennes, Nord-Pas-de-Calais France on Friday, May 09, 2008
the book arrived safely here yesterday!
Thank you for sending it!

Journal Entry 7 by Brujula from Valenciennes, Nord-Pas-de-Calais France on Thursday, June 26, 2008
I've really enjoyed reading this book, it is funny, well written (almost to much! I had to stop reading page 242 and close my eyes so I wouldn't be sick in the train (that would be the scene in the bathroom which involves scissors)

Anyway. I did enjoy it. Thanks for sharing!

Journal Entry 8 by Brujula from Valenciennes, Nord-Pas-de-Calais France on Friday, June 27, 2008
Mailed to Finland this afternoon.

from Nokia, Pirkanmaa / Birkaland Finland on Tuesday, September 16, 2008
7.7. I arrived from relaxing 2-week-long stay in a summer cottage yesterday and the book had arrived during that time. Thank you, Brujula!

16.9. It took a long time for me to read this book, but after all it was over 500 pages! I enjoyed Mark Haddon's first book, The Curious Incident of the Dog in the Night-time, very much (a book which is written from the perspective of an autistic boy). This book was quite different - it told about a family of four, who all were going through something. The father had just retired and was starting to loose his mind (very likely had obsessive compulsive disorder). The mother was having an affair with her husband's former workmate. The daugher had divorced once and was hesitating to re-marry. The son was gay and had problems commiting to his partner. Even if the family was so messy, I think the story could have been told in a bit less than 500 pages. The characters were really good - something you can bump into real life too. They all had their faults and they didn't always do the right things or find the right answers to their problems. I liked the book very much, though like I said it could have been compressed in a few hundred pages long.

I'm waiting for the address of the next participant.

19.9. I mailed the book for Miloute this morning.

Journal Entry 10 by Miloute from Saint-Malo, Bretagne France on Friday, October 10, 2008
Received the book from hetku77 the 03.10. Thanks very much for sending it!

I'm taking it on a train home tonight, 4 hours with Mark Haddon, I can't wait!

from Nantes, Pays de la Loire France on Monday, December 01, 2008
I just received it. Thank you.

I still don't know what to think about the last sentence.