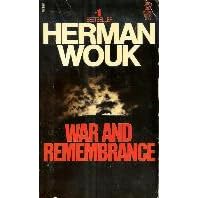 NOTE: This book has a different cover

Annotation
Pulitzer Prize-winner Wouk's classic, bestselling epic of an American family during World War II. "The reader is going to be caught up in the excitement and sheer kinetic force of this powerful story . . . relive a period of history . . . and come away richer for the memories."--James A. Michener. A miniseries based on this book was an ABC Television Event of the Century. Reissue.

From the Publisher
Follows the various members of the Henry family as they become involved in the events preceeding America's involvement in World War II and captures all the drama, romance, heroism, and tragedy of the Second World War-and that constitute Wouk's crowning achievement-are available for the first time in trade paperback.

Heheheheheh. Themed release! I found this on on a bench beside one of the guns in Battery Park. The guns appear to have no electrical or electronic equipment at all, so I can't quite see the relevance of the name, however it was nice to be able to see Fort Sumter low on the horizon, still bravely afloat.

I added my own collection of almost totally non-themed releases.

Journal Entry 4 by patchz from San Antonio, Texas USA on Sunday, August 26, 2007
While on vacation in Charleston SC we were walking in the park (Battery Park) when I saw some books on a park bench I picked up War and Remembrance and saw the sticker that told me it was ok to take so since I like to read I took the book. I think this is a great Idea and I hope I will be able to share some of my books with someone else. I will release this book as soon as I finish it. thank you

Journal Entry 5 by patchz from San Antonio, Texas USA on Wednesday, October 17, 2007
I am passing this book on a friend here in SA, Tx. She was with me when found it.