America Is My Neighborhood 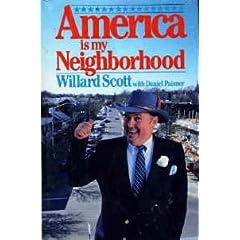 Annotation
Willard Scott gives us a heartwarming collection of American portraits--the real folks he's met on his many trips out of the TV studio.

From The Critics
Publishers Weekly
This is a book calculated successfully to hit America in the heart, to bring a smile to the lips and a lump to the throat. At the start, Today Show weatherman Scott confesses that he's a sucker for cheerleaders and marching bands, then interviews organizers of both. He goes on to ``working-class heroes,'' handicapped and phobic people who have beaten the odds, Christmas lights and trees, radio announcers, clowns and circuses, philanthropists (usually poor), immigrants who have succeeded and very old people. All of them, in Scott's perspective, are just grand and upbeat. Sophisticated readers may overdose on the book's down-home folksiness, but considering Scott's popularity on the tube, it should sell very well indeed

"'When I'm done with the book,' she said, 'it is also done with me and moves on. I leave it on a bench in Columbus Park.'"