Journal Entry 1 by DMA7 from Union, New Jersey USA on Wednesday, September 07, 2005
FROM THE PUBLISHER
Charles Mason (1728-1786) and Jeremiah Dixon (1733-1779) were the British surveyors best remembered for running the boundary between Pennsylvania and Maryland that we know today as the Mason-Dixon Line. Here is their story as re-imagined by Thomas Pynchon, featuring Native Americans and frontier folk, ripped bodices, naval warfare, conspiracies erotic and political, and major caffeine abuse. We follow the mismatched pair--one rollicking, the other depressive; one Gothic, the other pre-Romantic--from their first journey together to the Cape of Good Hope, to pre-Revolutionary America and back, through the strange yet redemptive turns of fortune in their later lives, on a grand tour of the Enlightenment's dark hemisphere, as they observe and participate in the many opportunities for insanity presented them by the Age of Reason

Journal Entry 2 by Antof9 from Lakewood, Colorado USA on Monday, September 26, 2005
WOW! This is a Very Serious Book! (and don't worry, I'll put a label in it)

Thanks, DMA -- I'm finally getting around to catching all of these. Thanks for sending them :)

I’m putting this one aside for a care package. The girls in my church are putting together packages for 20 soldiers, and I got so excited when I saw “books” on the list! Of course, that’s what I signed up for :)

I'm including a picture of the "Aspen turning", a particularly Colorado thing to see. This was taken on a quick drive my husband and I took up into the mountains. This is how my part of the country looks at this time of year :)

Journal Entry 4 by Antof9 from Lakewood, Colorado USA on Monday, October 24, 2005
Out of the 40 books I sent for the girls to pack (I was in NY on a business trip the night they packed boxes), only 3 didn't fit! I thought about wild releasing them, but then I thought . . . they have their passports all ready, and they should get to travel a little more! And so, they are jumping in the m-bag going to our friends in New Zealand. 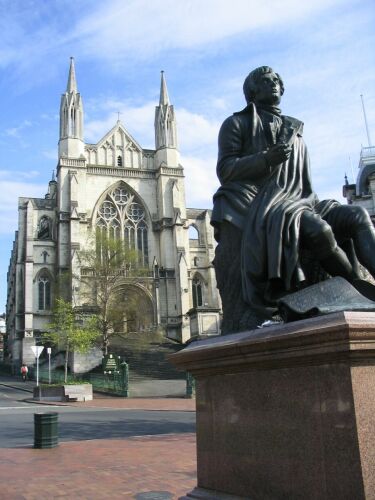 I have saved the biggest book until last!
One of the many books that arrived in four m-bags the other day for the NZ bookcrossing convention. Many thanks dvg for sending the book and Antof9 for organising the bags, your contribution to our convention is much appreciated.
This does look a gripping read thanks, again DMA7!
And you will be pleased to know Antof9, that this is the last book (I think) from the first batch of bags.

The attached photo shows a view of Dunedin's Octagon.

I found this book (which was on my wish-list) in my goody bag at the fantastic Dunedin Convention.

Of course, now I've got this book, I'm going to have to read it. I'm not sure my arms are strong enough!!!

Journal Entry 7 by futurecat at Christchurch, Canterbury New Zealand on Monday, March 28, 2011
I think I'm going to have to admit defeat. This book has sat on Mt TBR for more years than I like to think about, but every time I go to pick it up, the sheer physical size has put me off. I decided though this week that a book about a moment in US history would be a good way to prepare for my upcoming voyage across that country, so braced my arm muscles and started reading. By page 37 I realised that it should have been my brain muscles I braced - it's completely incomprehensible! Ok, not completely - I can discern a plot, and I can even see some of the clever literary trickery Pynchon is using and understand why he's using it (I'm obviously spending way too much time around academics). But it's all just too much like hard work.

And there doesn't seem to be a lot of reward for all that hard work - I've read plenty of difficult books that have been worth the effort they've taken, either because of the sheer beauty of the language, or the intensity of the story, but Pynchon's language is clever rather than beautiful, and four chapters in the story hasn't grabbed me at all. It's a pity, because the reason it was on my wishlist at all was that it came highly recommended by an erstwhile colleague, so maybe if I persevered I'd discover it really is worth its reputation, but all I could think of while I was reading was "what if it's like this all the way through?".

Ok, this is a huge amount of review for a book I've only read 1/20 of, but it's very rare that I abandon a book part-way through. In fact, it's probably only the second book I've done so with in the last five years or so. And especially as this came so far to get to me, I feel like I owe it and the previous journallers some explanation.

On the free stuff table outside the English department.