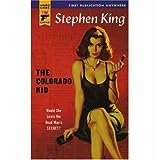 by Stephen King | Mystery & Thrillers | This book has not been rated.
ISBN: 0843955848 Global Overview for this book
Registered by

from Port Richey, Florida USA on Sunday, October 09, 2005
I tried not to buy this book. Really, I did. But it was so tempting.. and was sitting on the shelf just screaming my name, so I had no choice, you see.

ON an island off the coast of Maine, a man is found dead. There's no identification on the body. Only the dogged work of a pair of local newspapermen and a graduate student in forensics turns up any clues, and it's more than a year before the man is identified.

And that's just the beginning of the mystery. Because the more they learn about the man and the baffling circumstances of his death, the less they understand. Was it an impossible crime? Or something stranger still....?

from Port Richey, Florida USA on Thursday, October 27, 2005
I loved it! It had been a while since I had read anything by King, but it took me only about 2 sentences to get right back into the flow of his words. This was a great tale... I can see why, based on the ending, many would not like the book, but I happen to have loved the ending.


I liked the ending because it was more genuine to me than it would have been if he had come up with the real reason for the murder. Like the characters said and he said in his afterward, life doesn't always have an actual beginning, middle, and end. It's good to have stories soemtimes that aren't really stories, that have no real resolution... keeps you on your toes!

This book is going with me to the next bookcrossing meeting where I'm sure someone will grab it up!

Journal Entry 3 by abqbobcat from Albuquerque, New Mexico USA on Saturday, November 12, 2005
I picked this book up at the Bookcrossing meeting at the Blue Dragon today.

"Books are one of the few things men cherish deeply. And the better the man the more easily will he part with his most cherished possessions."