Dolly: My Life and Other Unfinished Business

A fun diversion, Dolly by Dolly. She has a happy voice and tells her life story with frankness. I, personally, think she goes a bit overboard to paint herself as the innocent but, what the heck, it aint Shakespeare ! This one is up for grabs.

If you click on the picture, you will get a much clearer photo of Dolly.

What could be more USA than country-western music and Dolly Parton ??!! This little audio book is going to travel to New Zealand in Antof9's M-bag, to join in the fun at the 2006 BookCrossing convention. I hope it falls into the hands of someone who will get a kick out of Dolly's story. Enjoy...and remember to share. 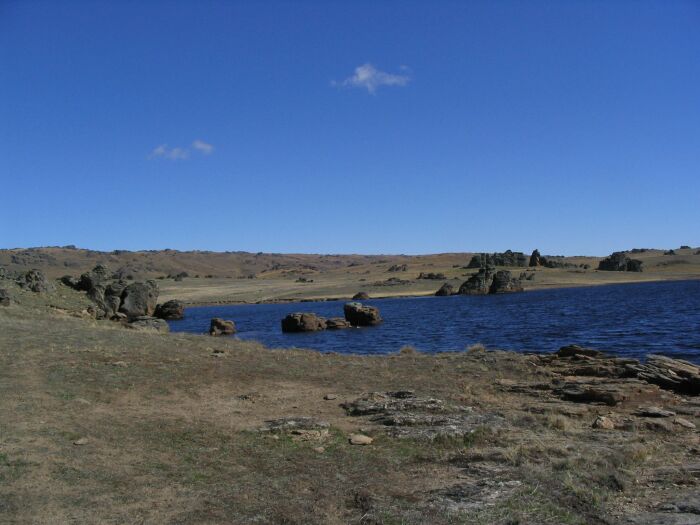 Another book from one of the four m-bags that arrived here in Dunedin recently for the NZ Bookcrossing convention. Many thanks Hotflash and Antof9, your contribution to our convention is greatly appreciated.
Ohh, an audio book, lots of people love these, in fact it was an audio book that got my mother reading again.

The attached photo shows the Poolburn dam in inland Otago, it was used as a location for LOTR's but the Boreal family has been going there for the fishing for as long as I can remember.

My last day in New Zealand - on this trip, anyway. I released this book into the bookshelf - the well-stocked bookshelf - in our happy home away from home at the Next Stop Backpackers.

Journal Entry 5 by futurecat from Christchurch, Canterbury New Zealand on Saturday, May 20, 2006
Picked up from the bookshelf at Next Stop when Lytteltonwitch, Awhina and I came down for the booksale. We're planning on listening to it on the drive back to Christchurch - it looks just the right length for a 5-6 hour drive, and it will nicely drown out Awhina talking about her new man ;-p

Hey, I recognise that view of Poolburn - the FutureCat family has spent a lot of time up there fishing too.

Journal Entry 6 by futurecat from Christchurch, Canterbury New Zealand on Saturday, June 03, 2006
Well, we never did get to listen to Dolly on the trip home - something to do with the fact that Awhina had lost the security code to her car stereo, and seeing as she'd had the car serviced just before the trip, it had reset itself and wouldn't let us play a tape without putting the code in.

However, it was a cold winter's day today, and after a tough week at work I felt like spending an afternoon sitting in front of the fire doing some embroidery, so I decided to listen to the tapes while I stitched.

The stuff about Dolly's early life growing up in the mountains was really interesting - it's such a different childhood to anything I've ever experienced. But once she hit the big time I got a bit bored with the story, and I'm afraid by the final tape, where she's talking about God and angels (and what a wonderful person she is) I wasn't sure whether I wanted to scream or vomit.

Oh well, at least it kept my ears entertained while my hands and eyes were busy with my embroidery.

Journal Entry 7 by futurecat from Christchurch, Canterbury New Zealand on Sunday, June 11, 2006
Given to another bookcrosser at today's meetup.

Journal Entry 8 by marcienz from Kimbell, Canterbury New Zealand on Monday, June 12, 2006
"Found" at coffee culture on Papanui Road. I like reading biographies so now I can try and listen to one. Maybe when the snow melts and the schools are open again I will be able to listen to it. I'll pass it on to my Mum, who likes books on tape, when I'm finished.

Journal Entry 9 by marcienz at Given to my brother in Porirua, Wellington Province New Zealand on Sunday, June 25, 2006
RELEASE NOTES:

My wee brother (ok he's 6 foot 4 and thirty something) couldn't wait to hear Dolly's story in her own words.

Journal Entry 10 by marcienz at Bookcrossing Meetup - details in notes in Christchurch, Canterbury New Zealand on Tuesday, May 13, 2008

This came back to me on the weekend so I'll take it to the Cafe Bleu in case someone else wants a listen to this great lady....

Journal Entry 11 by ReadingRuth from Christchurch, Canterbury New Zealand on Tuesday, May 13, 2008
I caught this book at my first BookCrossing Meetup, and look forward to reading sometime soon.

Journal Entry 12 by ReadingRuth from Christchurch, Canterbury New Zealand on Saturday, July 19, 2008
I enjoy reading biographies, but this is not one I would usually have chosen. I acquired it at a BookCrossing Meetup, only because it's an audio book and I like to listen to these when I'm awake in the wee small hours, or lying in on a weekend morning.

To my surprise I was completely drawn in by Dolly's story of her early life in the Smoky Mountains of Tennessee. Her down-to-earthiness is appealing and her determination amazing. I Iearned the origins of her song about the Coat of Many Colours, but the tune that kept echoing in my head was the old one about Davy Crocket, the only other character I know of who was "born on a mountain top in Tennessee".

Her years in showbusiness I found less interesting, especially as I have little knowledge of or interest in the country music scene. She mentions (and thanks) many people I've never heard of. However the occasional references to her mountain upbringing and to her strong faith were enough to keep me listening to the end. She spoke of how god and her unconscious were inseperable, and that was something I could relate to. This is a believable book, but enough of showbiz celebrity to last me for quite a long time.

Left on a 'leaner' in the arcade

"Books are the bees which carry the quickening pollen from one to another mind."