by Release Challenge | e-Books |
ISBN: Global Overview for this book
Registered by nice-cup-of-tea of Zürich, Zürich Switzerland on 5/26/2005

Journal Entry 1 by nice-cup-of-tea from Zürich, Zürich Switzerland on Thursday, May 26, 2005
Zurich has been visited (or invaded) by 621 Teddy Bears. They'll be here from May - September 2005, and what a great excuse for a release challenge! Find out more about Teddy Summer 2005!

Journal Entry 2 by nice-cup-of-tea from Zürich, Zürich Switzerland on Friday, May 27, 2005

Journal Entry 3 by nice-cup-of-tea from Zürich, Zürich Switzerland on Friday, May 27, 2005

Journal Entry 4 by nice-cup-of-tea from Zürich, Zürich Switzerland on Friday, May 27, 2005

This book has been Found!!!

Friday, May 27, 2005
Have not read it yet - but found it underneath a plastic teddy bear in Zurich's most expensive location....I will be back once I have read the book (putting all the other ones in on the back burner)

This was the closest bear to the Noble Dubliner, which was appropriate given that it was a Maeve Binchy book!

Being looked after by the strange elephant / indian god / teddy hybrid!

191: Baerenerarke Partner
June 3 2005
Death in a Strange Country: Donna Leon
This book has been Found!!! It's now in Israel

This is a bear close to the canal on the Schanzengraben - he's watching over a book about Venice and its canals!

Journal Entry 9 by KatColorado from Zürich, Zürich Switzerland on Friday, June 10, 2005
Now I have a copy of this lovely Teddy Summer 2005 book on my shelf... Cool ;-)) I really think it's such an excellent release challenge and we will have a lot more fun in the weeks and month to come!

I am a bit late, but now I also want to add my releases to this virtual book.

This book has been caught!!!

A catch and a new bookcrosser!

This book was caught!

I thought this bear looked wild and rugged, and like a Canadian Bear! The travel guide was tucked into his arm to look after :-)

I thought this was a beautiful teddy, and the wedding ring theme seemed to fit with a book called "The Honeymoon!"

Michael grew up on the Herb Garden (Almonte, Ontario) and did his fair share of gardening, so this bear seemed appropriate!

This was the only Teddy to choose to look after the London book!

Michael loved to fly and travel, and these bears had list of places on them that he'd visited, and an aeroplane on their bellies!

This pilot teddy seemed the perfect guardian for a book about Michael's passions - flying & Africa!

These Teddies had flags and travel and excitement written all over them. A perfect backdrop for Michael's life, and the book released.

This teddy is called (literally) "Prince of the castles in the sky, and his body has lots of quotes about "Himmel" (heaven). He just had to look after the 5 people book :-)

CAUGHT by AF on a German Train - and the first catch for Mike :-)

Eros and Lola seemed to be the perfect bears to look after a racy Jilly Cooper Number!

#538 Bärnstein
September 4, 2005
Circle of Friends: Maeve Binchy, as a tribute to my new friends in Zürich.

Don't forget to read the great article written by nice-cup-of-tea for the BookCrossing Newsletter!

Bearly missed
Zurich has finally said goodbye—or perhaps good riddance—to the 630 giant, painted, plastic teddy bears that occupied the city’s streets throughout the summer. Dreamed up by Zurich’s City Association, the project saw local firms commissioning artists to decorate the bears in an effort to “captivate the hearts of everyone who sees them.”

So much for good intentions. By the end of “Teddy Summer Zurich 2005”, 300 teddies had been damaged, 50 seriously vandalised and 25 totally destroyed, thrown in the river or stolen. A handful more were kidnapped and taken to Lucerne, Basel and Bern in a bizarre political protest against Sunday shopping. And two never even made it onto the streets, having been censored for offending public decency and the Chinese government respectively. The bears did have some fans, however: at an auction in October, 159 of the plucky survivors were sold off for a total of SFr345,000, with almost SFr100,000 going to charity. 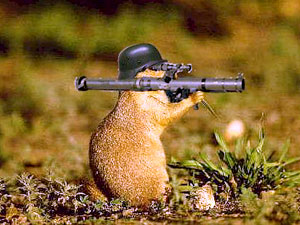 I used to live in Chicago when they had "Cows on Parade", an idea that came from (where else?) . . .Zurich!

To read an article on "cow crime", click here.