Journal Entry 1 by pam99 from Ochiltree, Scotland United Kingdom on Wednesday, January 19, 2005
Started reading this today, from kirsten365's book club deal. Not sure it's really my thing, I've read Emma but none of the others. I've heard others raving about it though so I'll give it a go.

Journal Entry 2 by pam99 from Ochiltree, Scotland United Kingdom on Wednesday, February 02, 2005
This was well written but I wouldn't rave about it - I think you'd get a lot more out of it if you're an Austen fan. It's got me curious enough to arrange to get Persuasion and give her another go...

Journal Entry 3 by BlossomU on Wednesday, February 09, 2005
Just arrived, thanks!

Journal Entry 4 by BlossomU on Thursday, February 10, 2005
I just finished it, it was obviously a very fast read. I really enjoyed it, a lot more than Sister Noon, the other KJF novel I had read. The style is nothing like Austen´s, and like Sister Noon the plot is all loose and wavery, the novel a collection of impressions and feelings and bits of history - but here it worked lots better. 6 people, 5 women and Each of the 6 characters form a club to read and discuss one Austen novel a month, and somehow each of them has some relation to an Austen novel, some of them echo more than just one Austen novel, and a lot of the book is about how each person´s Austen is different. The writing was mostly lovely, though with a few sentences now and then which made no sense. The narration was extremely strange, an omniscient "we" at times, a "I" in some parts, but it worked for me.

And for extra special fun, the book includes pages of opinions on Jane Austen throughout the ages, loved that part.

I am gonna organize a small local bookring right now, I know at least Xana and Virgulina want to read it.

Journal Entry 5 by BlossomU on Monday, February 14, 2005
I know a few bookcrossers who would like to read this, so am organizing a small, random local bookring for it

- Patxocas, Lisboa
- Escalla, Lisboa
( must check if somebody else is interested). And after book returns to me I got some other release plans for it.

Journal Entry 7 by tho on Tuesday, March 08, 2005
A quick and somewhat enjoyable read, but not something I would heartily reccomend. Enjoyed the comments and discussions about the books, it's funny how there can be so many different opinions, but the personal lives of each character (except for Jocelyn, maybe) were a bit boring and uninteresting ...

Going to the next person tomorrow ...

Journal Entry 8 by usedtobe on Wednesday, March 09, 2005
This is now with me. I'm a bit discouraged by the previous entries, but I'll read it and see what I think. Thanks! :o) 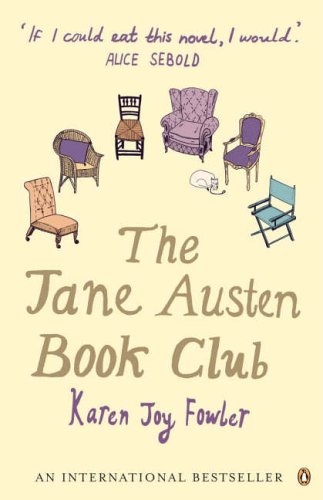 I confess I haven't read any of the books by Jane Austen (yet!) but I've seen a couple of the movies, though I know it's not really the same. I agree with pam99 when she says that you'd probably have to be a bigger fan of Jane Austen to really enjoy this book. The book discussions didn't interest me at all and the story outside the bookclub was very feeble. The characters lacked depth and I didn't care for them or what happened to them. Maybe when I've read a couple of Jane's books I'll pick this up again!

Journal Entry 10 by terpsicore from Algés, Lisboa (distrito) Portugal on Friday, June 17, 2005
passed on to me by BlossomU at the beerdeck in expo yesterday.
I started browsing through it and started to read it immediatly.looks like a fast and enjoyable read.

Journal Entry 11 by terpsicore from Algés, Lisboa (distrito) Portugal on Monday, June 27, 2005
fast and enjoyable read though I somehow lost interest in the characters in the last chapters.And the narrator's omniscience is a bit strange.
Made me want to re-read Jane Austen because I noticed I had forgotten a lot about them and that maybe I skipped something between the lines.
It was particularly interesting to read the reviews on her work by several people since when she started to write until today:everybody really has a different Jane Austen .

Journal Entry 14 by aneca on Tuesday, October 04, 2005
I liked it! It was my first by this author and I didn't really know what to expect but it was a nice read in the end.
The best part is that it made me want to reread the Jane Austen books I read in my teens. I liked the second half of the book better probably because by then I was more familiar with the characters and so more interested in their life stories.
I'll be sending it to Quico tomorrow.

I would recommend this to the Jane Austen reader's: the others will miss most of the fun.
This story about six very normal Jane Austen readers is an easy and enjoyable one. Being a Miss Austen admirer myself, I've enjoyed the comments about her books and the ways the caracters echoed Austen's caracters (like Jocelyn, the matchmaker hosting the discussion about "Emma").
Jane Austen wrote wonderful books about ordinary people living dull lives. KJF is no Jane Austen... but she made me want to reread "the real thing". And that's good.

Journal Entry 17 by quico from Coimbra (cidade), Coimbra Portugal on Friday, October 28, 2005
On the road again...

Journal Entry 19 by Tarsius on Wednesday, January 04, 2006
Interesting book, although much more if I was more of a fan, I guess...
I liked her descriptions of each character for their variety, but not so much the discussions concerning the books themselves. What I really liked was to read the comments people over the centuries have made regarding Jane Austen. And also the questions each character poses.

"People without curiosity are like houses without books: there's something unsettling about them."