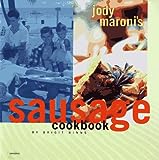 Journal Entry 1 by ainead from Redcliffe, Queensland Australia on Wednesday, October 20, 2004
The recipe I made from this book was:

I had to do quite a bit of substituting in this recipe. Coarse sea salt was replaced with a lesser amount of normal salt, Chamagne vinegar was swapped with Apple Cider Vinegar. Aragula leaves... well I took a big guess that this was some kind of lettuce and got some rocket leaves instead. Oh, and I used plain potatoes instead of red ones.

The recipe worked out quite well. It was a potato salad far superior to the offerings our local supermarket has in their ready-made salads. However I've made another potato salad (in the women's weekly salad mini cookbook) that outdid this one by far for richness and mix of flavours.

Still it was a nice enough recipe and I would cook it again.

I've noticed that this book appears to be an American offering. This means you've got Buckley's chance of finding Jody Maroni's sausages in Australia. However I'm pretty sure you'll be able to find a similar alternative from either the specialty sausages range in the meat section or from the deli or even a specialised butcher if you feel like going all-out.

Have fun trying some of these fabulous recipes.

That website gives a table of conversion from the US measurements to Aussie ones.

Journal Entry 3 by sun-king from Albany Creek, Queensland Australia on Wednesday, October 20, 2004
Found this one when I returned to my shift from a break. I should have known who released it! ;-)

Mind you, there is a bit of a challenge inside the front cover of the book, which I shall take up at some stage...