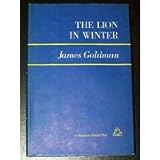 The Lion in Winter

by James Goldman | Plays & Scripts | This book has not been rated.
ISBN: 111106184X Global Overview for this book
Registered by

from Nashua, New Hampshire USA on Wednesday, October 03, 2018
I got this hardcover from an online seller. It's a 1981 edition of Goldman's now-classic play - with a droll introduction in which he points out how the play's initial Broadway run was a total flop, and he's still bemused at the resurgence of interest following the magnificent 1968 film.

I've enjoyed several stage versions of the play, including two in which my sister starred as Eleanor! The sparkling - and often magnificently vicious - dialog is a delight, and the machinations of everyone in the family make modern dysfunctional families seem tame by comparison. (And much less witty {wry grin}).

[There's a TV Tropes page on the play and adaptations, with some entertaining tidbits.]

I left this book, bagged against the elements, in a handsome sculpture in the park - reminiscent of a castle, so suitable for this book! Hope the finder enjoys it!