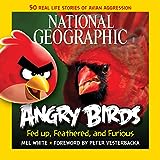 National Geographic Angry Birds: 50 True Stories of the Fed Up, Feathered, and Furious

from Nashua, New Hampshire USA on Wednesday, December 20, 2017
I found this softcover at a local Savers thrift shop. It's an amusing and informative look at birds around the world. It contains a variety of facts about real-world birds (grouped in different levels of anger!), and also throws in character sheets for the Angry Birds from the video game. There are wonderful closeup photos of birds - and some amusing (and sometimes scary) "caught in the act" images of birds attacking people, cars, even ultralite airplanes).

The bird-facts don't hold back on the potential violence in the bird world; even the tiny wren is described accurately, from its amazingly-loud chattering to its tendency to take over the nests of other birds. And there's a grisly photo of a Northern shrike sitting on a branch near its prey - which it impales on thorns as a way of saving the food for later...

From hummingbirds to ostriches, there's a lot of fascinating information here!

I left this book in the Little Free Library on this icy afternoon; hope someone enjoys it!

"I love to lose myself in other people's minds. Books think for me."