from Elk Grove, California USA on Monday, November 20, 2017
I've had this older paperback published by Avon for several years along with quite a few other Du Mauriers. Registering for release.

The story of a deadly curse that afflicted an Irish family for a hundred years. — "I tell you your mine will be in ruins and your home destroyed and your children forgotten... but this hill will be standing still to confound you." So curses Morty Donovan when Copper John Brodrick builds his mine at Hungry Hill. — The Brodricks of Clonmere gain great wealth by harnessing the power of Hungry Hill and extracting the treasure it holds. The Donovans, the original owners of Clonmere Castle, resent the Brodricks' success, and consider the great house and its surrounding land theirs by rights. For generations the feud between the families has simmered, always threatening to break into violence....

at Elk Grove, California USA on Sunday, December 10, 2017
I've read a few other books by du Maurier and always enjoyed them, most recently Jamaica Inn. Hungry Hill is one of several du Maurier novels that I bought awhile ago at a thrift store. It is basically an historical novel telling the story of several generations of the Brodrick family in Ireland from 1820 to 1920. When I first started reading this, I was not sure if I would finish it but the more I read, the more I was engrossed by the story. It starts out with the story of Copper John Brodrick who starts a copper mine on Hungry Hill outside of the Brodrick estate at Castle Clonmere. Brodrick opens the mine in hopes of making life better for his family and the people of the town but it is frowned upon by most of the community of Doonhaven and especially by the family that formerly owned the land, the Donovans. Old man Donovan tells Copper John that "your mine will be in ruins and your home destroyed and your children forgotten ...but this hill will be standing still to confound you." So the Donovan curse passes through the generations of Brodricks with tragedy awaiting most of the successors to the copper fortune.

From Wikipedia:
Hungry Hill is a novel by prolific British author Daphne du Maurier, published in 1943. It was her seventh novel. There have been 33 editions of the book printed.

This family saga is based on the history of the Irish ancestors of Daphne du Maurier’s friend Christopher Puxley. The family resembles the Puxleys who owned mines in Allihies, a parish in County Cork. 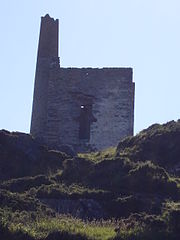 The title sometimes is thought to refer to Hungry Hill which is the highest peak in the Caha Mountains in County Cork, and du Maurier's description of the Hungry Hill is similar to the physical aspects of that place. Rather than simply referring to the hill, however, the title alludes to the curse put on the family by Morty Donovan, arch enemy of patriarch Copper John Brodrick, at the start of the novel, and the fact that the mines seem to "swallow up" the lives of the Brodrick family through five generations, by early death, dissipation and unhappiness.

Many of the place names in the novel are imaginary, and the location is never directly stated to be Ireland, although it can be inferred from several references to "crossing the water" to reach to London, Hal's embarkation from Liverpool en route to Canada, and, in the Epilogue, the Irish War of Independence (1919-1921). However, the description of the Brodricks' mansion reportedly was based on the Puxleys' mansion in Carmarthenshire, South Wales.

Overall, this book really had a feeling of melancholia throughout with pending doom coming to the family. I didn't enjoy this as much as some other du Maurier's I have read like House on the Strand but I would still recommend it and I'll definitely be reading more of her novels.

Sending this one off to GoryDetails as a wishlist tag. Sorry this took so long. Hope you enjoy it!

at Nashua, New Hampshire USA on Saturday, December 23, 2017
The wishlist book arrived safely - despite the ice-storm currently attacking my area; many thanks! I've enjoyed many of du Maurier's works, but hadn't come across this one before. (I liked your comment about melancholia and pending doom - those seem to be hallmarks of du Maurier's work, whatever the setting! And House on the Strand is among my favorite du Maurier books, largely for that reason - plus the eerie-time-travel aspect...)

Later: Very melancholy here, though there are notes of hope. The political and social tensions drive much of the plot, though the focus is on the characters. I liked the way the family lines of the Brodericks and the Donovans, although the nature of the story and its generational time-skips left me wanting to know more about some of the secondary characters. But the main characters did have their moments, and I especially enjoyed some of the grace notes - such as Henry revealing what became of the miniature of his late wife that his son Hal had given him decades before...

The book was adapted to the screen in this 1947 film.

I plan to leave this book in the new Copper Door restaurant on S. Broadway at around 4:30, when stopping by for dinner. Hope the finder enjoys it!

"Can you grow kumquats here?" Wei-Ching asked. "I've always liked kumquats." "I can grow just about anything you like!" Hsun-ching boasted. "You tell me what you want, and I'll plant it." Wei-Ching laughed and said, "Too bad you can't plant books."