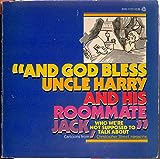 from Nashua, New Hampshire USA on Thursday, December 01, 2016
So begins this nice little collection of gay & lesbian-themed cartoons from Christopher Street Magazine. [This one's rather rare among the G&L cartoon collections I've seen in that it contains no nudity and relatively few overt references to sex, making it somewhat less likely to cause a sensation if browsed through by visiting relatives than, say, the Gerard Donelan cartoons!]

The cartoons cover a range of topics, from family (picture of Mom on the phone, saying "Hello, Benny. It's your mother. I only have a minute. Get married, have children. Goodbye.") to dating (picture of two trolls sitting on the bed, one saying "I must confess, you did look better in the bar." [they're really trolls - pointy ears and everything]) to posing (guy in suit addressing guy in leather: "Your milieu or mine?") to dating - oh, did that one already. And then there's the pair of angels gazing happily at a wildly ornate set of golden gates boldly labeled "HEAVEN" and saying "Now that's camp!"

[I've had this slightly-battered softcover on my keeper shelves for some years now, and I think it's time it went traveling.]

I left this book in the Little Free Library in front of the very picturesque funeral home at around 4:30; hope the finder enjoys it!

at Nashua, New Hampshire USA on Wednesday, March 29, 2017
I found this book still in the LFL when I stopped by to drop off more books. Am reclaiming it to release elsewhere.

I left this book in the Little Free Library at around 2:30; hope the finder enjoys it!

"Nobody ever committed suicide while reading a good book, but many have while trying to write one."