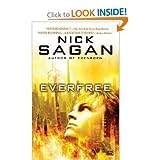 from Salt Lake City, Utah USA on Wednesday, October 21, 2015
It took me a bit to get into this, possibly because I've not read the previous books. Then again, It could have been my mood ;p At any rate, 'twas worth plowing on. Please forgive the waviness at the back....I knocked over my iced tea :(

Having successfully weathered the trials and tribulations of Idlewild (2003) and Edenborn (2004), the PH (post-human) trailblazers genetically designed in the last dark days of the humanity-annihilating Black Ep plague are finally putting their species back on track. In the ostensibly comforting confines of Cambridge, Mass., the PHs, raised in virtual-reality environments and boasting plague-resistant immune systems, carefully begin to thaw out those who went into cryofreeze during the plague in hopes that science would stop Black Ep. It did, and all should now be set for humanity to slowly rebuild itself from the ground up, avoiding the mistakes of the past. Easier said than done, since those who had the money to be frozen were the wealthy tip of the American socioeconomic iceberg, meaning that humanity is now mostly composed of former CEOs, tycoons and politicians flush with ideas of carnivorous capitalism and jostling for control in the newly virgin world. Sagan relates these developments via the cynical narration of Gabriel Hall, ill-tempered protagonist of Idlewild, who is now in charge of security in Cambridge and has zero faith in the ability of these chest-beating alpha males to reconstruct society. Unsurprisingly, the humans foment trouble with the peaceful, globally minded PHs, cloaking their naked power grabs in the faux-populist, laissez-faire lingo of dog-eat-dog 21st-century capitalism. Sagan loses some steam halfway through, splitting the middle of the novel into a hodgepodge of narration provided by other PHs, but he brings the story to its end with a refreshing grace and palpable sadness rare in fantasy of this kind.

A powerful plea for sensible human cooperation delivered via a knockout story.

Off to find a next home via the Otherworldly Bookbox~~

at Evanston, Illinois USA on Tuesday, December 29, 2015
Taken out of the Otherworldly book box.

at Evanston, Illinois USA on Sunday, February 18, 2018
I absolutely loved this book! I didn't remember it was part of a seties when I pulled it from my TBR pile. I actually found it intruiguing that the book starts off fourty years after the Black Epstein virus decimated the world's population.

Thanks for including this in the otherworldly book box. It's the type of posthuman science fiction I enjoy and I hadn't heard of this before the box got to me.

Left in the little free library.