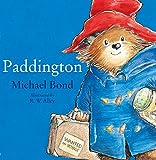 by Michael Bond | Children's Books |
ISBN: 0007366469 Global Overview for this book
Registered by

from Rotherhithe, Greater London United Kingdom on Friday, April 10, 2015
I wasn't intending to indulge in buying a new book but I gave into temptation today as I stepped off the Eurostar and into a good bookshop in St Pancras Station. This is destined for some little people... It's one that my daughter (nearly 2) has begun to enjoy.

This is a NSS gift for the family of another Oxford Bookcrossing attendee.

at Stenstorp, Västergötland Sweden on Wednesday, April 15, 2015
Thank you so much for this sweet book. We read it several times just the first night.

at Stenstorp, Västergötland Sweden on Saturday, September 4, 2021
We still cherish this book. So sweet! Now it will come in handy as my nine year old is learning English.

"Can you grow kumquats here?" Wei-Ching asked. "I've always liked kumquats." "I can grow just about anything you like!" Hsun-ching boasted. "You tell me what you want, and I'll plant it." Wei-Ching laughed and said, "Too bad you can't plant books."