The Piano Tuner : A Novel

by Daniel Mason | Literature & Fiction |
ISBN: 1400030382 Global Overview for this book
Registered by powerhouse of Culemborg, Gelderland Netherlands on 1/18/2004

Journal Entry 1 by powerhouse from Culemborg, Gelderland Netherlands on Sunday, January 18, 2004
... Now only the sun and the parasol remain.
(this edition has the tiniest font I ever saw)

Passed it on to BookCrosser. My first RABCK!

Journal Entry 2 by BookCrosser from Culemborg, Gelderland Netherlands on Wednesday, January 21, 2004
This book has been on my wish list for almost a year. Thanks, powerhouse, for dropping it into my letterbox.

Journal Entry 3 by BookCrosser from Culemborg, Gelderland Netherlands on Friday, February 06, 2004
A captivating novel. It deserves many readers, so I will ask if anyone on the Dutch forum would be interested in the book (they should!)

Received this book at the bookcrossing meeting in Utrecht this evening. It may take a while before I'll get to read it with a move coming soon and all the bookrings I'm participating in. 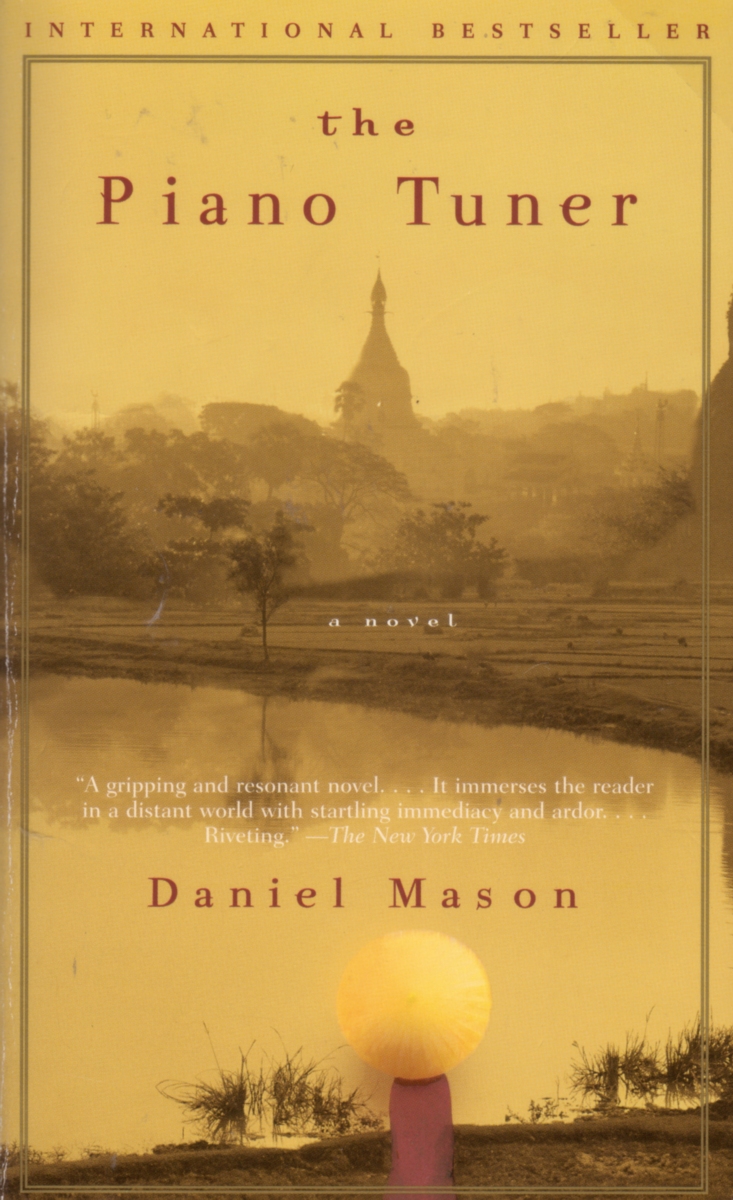 What a beautiful book this is, I love books based on real history!
This book was my introduction to the writing of Daniel Mason and I like his style of writing a lot, although sometimes the dialogs between two people get confusing as he writes them right after each other. I found it interesting to read about Burma and it's people and Mr. Drake's journey from the UK.
I would like to read more of this author, but I see this is his only book so far.

Journal Entry 7 by dutch-flybabe at To fellow bookcrosser in Arnhem, Gelderland, Netherlands -- Controlled Releases on Monday, May 08, 2006

RELEASE NOTES:
I had reserved this book for iiwi and given it to Hellehond at the meeting at moem's yesterday. She will transport the book for me. Thanks Hellehond and happy reading iiwi (surprise)!

21-5-2006: it turned out I could have given the book to iiwi myself since we both were at the meeting at OBCZ-Hartloper today :-)

from Zeist, Utrecht Netherlands on Sunday, May 21, 2006
A RABCK! Thxs Dutch-Flybabe. It has small letters but large white spaces between the lines (don't know the English word for interlinie :) ).

from Zeist, Utrecht Netherlands on Saturday, August 11, 2007
"It was a tuner''s piece, an exploration of the possibilities of sound... it is a piece bound by strict rules of counterpoint, as all fugues are, the song is but an elaboration of one simple melody, the remainder of the piece destined to follow the rules established in the first few lines. To me this means beauty is found in order, in rules..."

It is, ofcourse, apparent that I took this quote as my quote of the book, as anyone who knows me can understand. :) The above quote says something about The Welltempered Clavier (I love Bach, but never have heard the well temperred clavier btw), and says something about me, it says something about the main character of the book, Edgar Drake.
Another ofcourse is that this book remides one of heart of darkness, or, as in my case, if one hasn''t read it, Appocalyps now. Even more maybe, it remided me of Fitzcarraldo, an Englishman who wanted to build an operahouse in the middle of the Peruan jungle, and had to lift a steamship with supplies over a mountain in the jungle, from one river to another.

It is a gripping novel, and one that deserves discussion afterwards. Everyone can have his own thoughts about this book, and what things mean, which is lovely. What about this story of the man with only one story? And what about te ending? It seems dreamlike. Where in the book do you think it started to become a dream? At the end, or way earlier? Maybe from the beginning, as "We have been ghosts since this all began" could imply. Al things I guess, every reader could get his own opinion about, which would be all equally true.

I really loved the pieces about Birma, and the Birmese puppetplay.

Journal Entry 11 by Qimp from Deventer, Overijssel Netherlands on Sunday, September 02, 2007
The piano tuner arrived safe and sound, will try to read this book as soon as possible. Thanks iiwi, for sending it.

Journal Entry 12 by Qimp from Deventer, Overijssel Netherlands on Thursday, October 04, 2007
Beautiful. Tomorrow the piano tuner will travel to Olifant. Thanks iiwi for ringing this book!

Journal Entry 13 by Olifant from Porthmadog, Wales United Kingdom on Tuesday, October 09, 2007
Safely arrived in Utrecht, in a beautiful cover, Qimp! It will take a while before I can start in this one for I still have a lengthy ringbook to go: Peacocks Dancing.

Journal Entry 15 by Plinius from Schiedam, Zuid-Holland Netherlands on Wednesday, November 21, 2007
Thanks Olifant! Good journal entries, the readers I love to share with: this will be a good read. But I'll clean my reading glasses first!

Journal Entry 16 by Plinius from Schiedam, Zuid-Holland Netherlands on Thursday, December 06, 2007
A lovely story! Edgar Drake's journey contains layers of meaning and beautiful ways to look at the world and feel the quality of what we've got.

Journal Entry 17 by Plinius at book ring in a RABCK, By Mail/Post/Courier -- Controlled Releases on Thursday, December 06, 2007

Journal Entry 19 by Prowisorio from Westerbork, Drenthe Netherlands on Wednesday, December 19, 2007
Nice and beautiful written book.. very dreamlike. There is one particular part that I will remember. I already quoted this on the Dutch forum and told that I couldn’t explain why without having to write a book. Well... I won’t , so I just quote it and leave it at that :-)

"Edgar nodded, and gripped his reins. Nok Lek hissed at his pony; it began to trot. Edgar kicked at the flanks of his. Nothing happened. He kicked harder. The pony didn't move. Nok Lek and Khin Myo were getting smaller in the distance. He closed his eyes and took a deep breath. He hissed."

Book will make the next stop at AnevO. Enjoy!! Tnx for crossing this book iiwi!

Journal Entry 20 by AnnevO from Rotterdam, Zuid-Holland Netherlands on Sunday, December 23, 2007
When I arrived home yesterday evening, this book had been delivered by the mailman. Thanks for sharing, I'm looking forward to it.

Journal Entry 21 by AnnevO from Rotterdam, Zuid-Holland Netherlands on Friday, January 11, 2008
I loved this book. The amount of detail in the descriptions of Birma, the puppet plays, the piano and my all-time favourite composer J.S. Bach was astonishing.

On a more personal note: iiwi, I think you would appreciate Das Wohltemperierte Klavier for the same reasons Edgar likes it.

Since this was a book ray, I'll try and find this book a new home soon.

Journal Entry 22 by AnnevO from Rotterdam, Zuid-Holland Netherlands on Friday, May 23, 2008
This book will travel to ireland as part of a trade!

Journal Entry 23 by AnnevO at Postal Release in Post office, A book trading site -- Controlled Releases on Monday, May 26, 2008

This book is on its way to Kimberleymikado as part of a trade. Enjoy!

Journal Entry 24 by kimberleymikado on Thursday, June 05, 2008
Arrived as a surprise trade from AnnevO...I look forward to reading it very soon!!:) Thanx a Mill!

"A good book is the best of friends the same today and forever. "