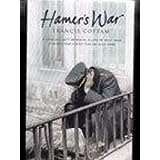 Journal Entry 1 by kzel from Melbourne CBD, Victoria Australia on Tuesday, January 14, 2014
A courageous and dedicated German soldier, Hamer has never questioned the cause for which he fights - until he is seconded to a labour camp in occupied Poland.

Taking to the meet up today

Journal Entry 3 by KKslibrary at Melbourne CBD, Victoria Australia on Wednesday, July 10, 2019
This was a beautifully written book, even though the main story took place in the most brutal of circumstances, a Polish Prisoner of war camp during World War 2. Martin Hamer is a courageous and decorated German soldier . He is brave, and was wounded fighting the Russians so is sent to a labor camp in Poland to recover. Martin’s wife died in a car accident just before the war, and he has been on his own since, and he misses her desperately. He meets Julia Smollen an inmate at the camp and he finds himself falling in love with her, and is faced with making a heartbreaking choice which will mean forsaking his rank, reputation and his homeland.

To be released at Meetup

"You're never too old, too wacky, too wild
to pick up a book and read to a child."